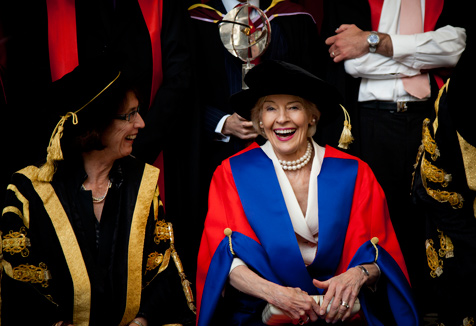 The Australian Governor-General, Quentin Bryce, has been acknowledged for her commitment to advancing human rights and equality with an Honorary Doctorate from the University of Western Sydney.

Her Excellency Ms Quentin Bryce AC, CVO, has received an Honorary Doctorate of Letters, honoris causa, during a Spring Graduation ceremony at the University’s Parramatta campus.

Quentin Bryce’s career has been characterised by courage and leadership, a willingness to raise and debate issues that need to be addressed, and to press for reform.

She is universally respected for her lifelong commitment to improving the status of women in Australia and has been a generous mentor, friend and admired role model to those many women who have followed in her footsteps.

In an extraordinarily diverse career she has often been a trailblazer for the rights of women, children and the welfare of the family.

In 1965 after studying at the University of Queensland, Quentin Bryce became one of the first women barristers admitted to the Queensland Bar. She subsequently returned to the University in 1968 and pursued an academic career in law until 1983. This laid the foundations of a distinguished public life of action and advocacy for human rights and the elimination of discrimination in Australia.

Some of the key roles that Quentin Bryce has held, among very many, have been: Convenor of the National Women’s Advisory Council; Inaugural Director of the Queensland Women’s Information Service in the Office of the Status of Women; Director, Human Rights and Equal Opportunity Commission for Queensland; Federal Sex Discrimination Commissioner, Human Rights and Equal Opportunity Commission; Founding Chair and CEO of the National Childcare Accreditation Council; Principal and CEO of The Women's College, The University of Sydney; Governor of Queensland for five years; National President of the Association for the Welfare of Children in Hospital; and Chair of the National Breast Cancer Centre Advisory Network.

The culmination of her distinguished career came in September 2008 when Quentin Bryce became Australia’s 25th and first, female Governor General.

The UWS Board of Trustees conferred an Honorary Doctorate of Letters on Her Excellency Ms Quentin Bryce AC in recognition of her distinguished lifelong contribution to Australian society.