Global Islamophobia: Muslims and Moral Panic in the West 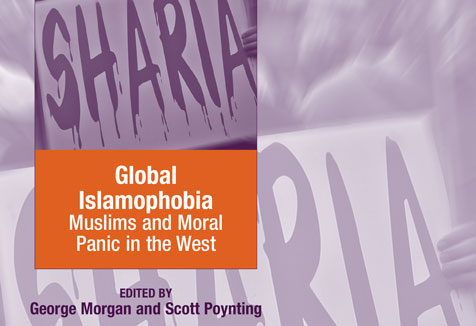 A new book to be launched at the University of Western Sydney next week will explore the Muslim experience in the West over the past decade, and argue the rise of Islamophobia constitutes the first global moral panic.

Global Islamophobia: Muslims and Moral Panic in the West, will be launched at the UWS Parramatta campus on Thursday October 18 at 1pm.
Edited by Dr George Morgan from the UWS Institute for Culture and Society and Professor Scott Poynting from the Manchester Metropolitan University, Global Islamophobia presents a series of case studies from Western Europe, Australia and North America demonstrating the transnational character of Islamophobia.
"Other eruptions of moral alarm – those provoked by youth cultures, for example – are largely contained within the nation or society in which they occur," says Dr Morgan.
"In contrast, Muslims in the West are under intense scrutiny, and are vulnerable to the perception that they form part of a global threat that cannot be contained by individual governments."
Dr Morgan says the book explores how more hysterical expressions of Islamophobia view mundane activities, like getting dressed and attending places of worship, with suspicion and moral alarm.
"Islamophobia sanctions the view that the Muslims are intent on undermining Western values and extends the scope of public sensitivity," says Dr Morgan.

"So the building of a mosque in Manhattan or a ban on the hijab in France may resonate with popular fears in distant societies like Australia."

The book chapters explore the influence of Islamophobia in various settings:

Media are invited to attend the launch of Global Islamophobia: Muslims and Moral Panic in the West on October 18, 1pm at the Boilerhouse at UWS Parramatta campus.

To speak with the researchers please contact the UWS Media Unit.