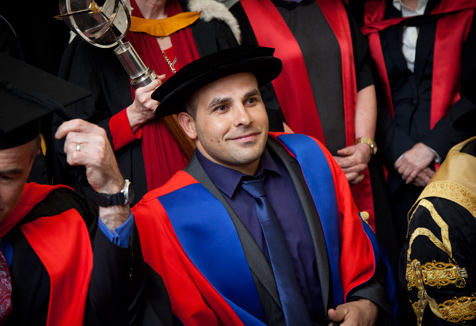 He is the NRL’s highest-ever point scorer, a passionate and tireless community leader, and an inspirational role model to many – now rugby league legend Hazem El Masri can add the title ‘doctor’ to his list of many achievements.

The University of Western Sydney is pleased award Hazem El Masri an Honorary Doctorate of Letters, honoris causa, in recognition of his distinguished service to the communities of western Sydney and for being a role model and leader in the Arabic community.

The ceremony was held on Tuesday 25 September at 5:00pm as part of the University’s Spring Graduation ceremonies, where Hazem also delivered the Occasional Address.

Hazem grew up in war-torn Tripoli in Lebanon, and came to Australia with his family at the age of 12, settling in western Sydney. From 1996 until his retirement in 2009 he spent his professional rugby league career playing with the Canterbury-Bankstown Bulldogs, as well as representing NSW and Australia at an international level and captaining Lebanon in their World Cup side.

Nicknamed ‘El Magic’ because of his prodigious goal-kicking and try-scoring abilities, Hazem has many distinguished career highlights, including being named the league’s top point scorer for the season a record six times, and only the seventh player in history to score over 150 NRL tries.

However it is his work off the field for which Hazem is equally as widely known, and for which he is so well respected.

During his playing career and since his retirement from league, Hazem has dedicated much of his time to community service, travelling to schools across Australia to mentor and build the aspirations of young people, as well as being an ambassador for countless community organisations and charities.

UWS Vice-Chancellor, Professor Janice Reid, says there are few in the community who embody the same values of the University as much as Hazem El Masri.

“UWS strives to make a difference in people’s lives, and it gives us great pleasure to recognise the same achievements by Hazem El Masri,” says Professor Reid.

“Through his actions both on and off the field, Hazem has exhibited a rare, modest dignity that has earned him the respect of all Australians. He has sought to channel his sporting fame and public profile into bringing about positive change, mentoring and inspiring a generation of young people, and working for the betterment of the community.

“One of his most admired qualities has been his willingness to devote his time and energy to helping bring Australians together, promote tolerance, and to improve the understanding between Australians of diverse religious and cultural backgrounds.

“The University of Western Sydney is delighted to confer this award on Hazem El Masri, in recognition of his outstanding service to the communities of Greater Western Sydney and making a significant contribution to Australian public life.”

Australian Rugby League Commission Interim Chief Executive, Shane Mattiske paid tribute to Hazem El Masri as one of Rugby League’s most outstanding players both on and off the field.

“Hazem’s ability to build bridges within the community and inspire people regardless of their religion or race is one of his greatest attributes,” Mattiske said.

“Time and time again throughout his career he has demonstrated these skills within the game, as well as the broader community. His work to inspire and encourage people is well recognised and behalf of the NRL I congratulate Hazem on this wonderful milestone in his career."

Read the story on ABC Online