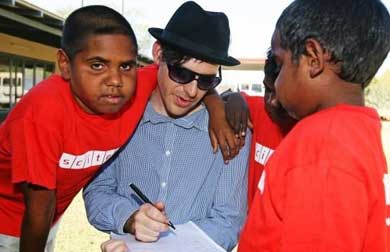 Joseph Catanzaro has a message for all students - to value their education.

Joey, a graduate of the University of Western Sydney and a Defence reporter at The West Australian newspaper, was recently named a winner of a prestigious Walkley Award for exemplary journalism.

In the typical style of a man whose career has been influenced by the heartache of war, he says: "Education is an incredibly powerful weapon to have in your arsenal, but you need to be the one who wields that power."

Joey grew up in Werrington County, just around the corner from where he received an offer to study a Bachelor of Arts degree at the UWS Penrith campus. However Joey admits that his path to university was an unconventional one.

After completing Year 12 at St Marys Selective High School, he deferred for a year so that he could "work in a few terrible jobs." According to Joey, taking this extra time to consider the alternatives of going to university was very important - it allowed him to develop a heightened appreciation of the opportunities that a tertiary education could provide.

"When I started at university, I was determined to study what interested me, which was writing. I knew that I wanted to write for a living, but I didn't actually consider a career in journalism until after I had graduated," says Joey.

When an editorial assistant position came up at The Bulletin, Australia's longest running and most respected magazine, Joey says he was up against a crowd of other "more experienced" candidates and didn't expect to be successful.

However the editor of the publication, current National Editor of Fairfax's Metro Media Division, Garry Linnell, was looking outside of the box that day. "My last job had been as a complaints manager at a call centre," says Joey. "Garry said to me, if you can do that job, you can do anything."

'Anything' happened to be answering phones at the reception of The Bulletin and fetching coffee. Joey stayed in the job for two years, whilst also writing and submitting news stories in his own time.

"The Bulletin was the place that people came to at the end of their career, but I was determined. I just kept writing and writing and occasionally some very kind people took pity and gave me some stories to work on," says Joey.

"I had the tenacity to stick with it, and eventually I think they realised that it would look embarrassing if the guy sitting at reception had an article published in every edition. So they gave me a shot."

Joey has carried this strong work ethic and determination with him throughout his journalism career. Following his graduation from UWS in 2005, Joey rose through the ranks of The Bulletin newsroom and by late 2007 was reporting from Iraq and Afghanistan.

Following the closure of The Bulletin in 2008, Joey took a position at The West Australian in Perth where he has worked for the past four years.

Joey's role as Defence reporter has taken him to the Middle East, northern Africa, the Solomon Islands, Thailand and Malaysia - and has now won him a Walkley Award.

On 27 November 2011, at a special ceremony in Brisbane, Joey was presented with a Walkley Award in the 'Print News Report' category. The award was given in recognition of his investigative report in The Weekend West, 'Secret Toll of War', which exposed the full emotional and physical toll of the war in Afghanistan on Australian soldiers.

A Walkley Award is Australia's most prestigious media accolade. More than 1300 entries are received each year from around the country, and the winners are voted for by their journalistic peers.

The judges described Joey's work as "a fine example of grassroots journalism" that "will have an ongoing impact on the treatment of returning Defence personnel." The judges also commended Joey's dedicated approach to the story, as he persisted for more than eight months in his pursuit for facts, figures, and a human face for the important story.

Joey says, although many students may be daunted by the seemingly impossible task of establishing a career in the competitive journalism industry, his own story proves that it is possible.

"The best advice that I could give any student, is the advice that my Dad gave me: You may never be the best-looking person in the room, or the smartest, but you can always be the hardest worker," he says.

"Those of you who really want to succeed, and who won't take no for an answer, will succeed. The most important thing to have is a genuine interest in people, and in listening to their stories.

"If you have this curiosity and enthusiasm, the stories will come from everywhere - just make sure that, when you see the opportunity, you have the guts to take it."