Students blog their spectacular journeys, with the help of UWS 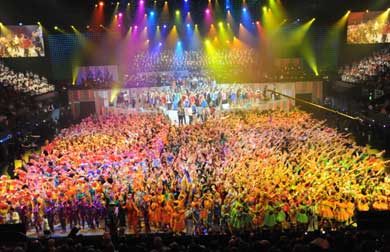 Schools Spectacular is the biggest event on the New South Wales schools calendar. Now a special behind-the-scenes look at all the fun of rehearsals has been put together by some of the performing students themselves, and is available for all to see thanks to the University of Western Sydney.

UWS, as the Major Sponsor of the Schools Spectacular, has provided four of this year's performers with digital cameras and video software so that they can each document and share the excitement of their 'Spectacular' journey.

Nathan Allgood, Emma Riches, Ben James and Grant Maling have all been busy recording their activities in the lead-up to Schools Spectacular and uploading the multimedia content onto their personalised and interactive blog sites.

The four bloggers were chosen from a pool of thousands of students for their outstanding commitment to the field of performing arts. Although they are still at school, each has already established a promising career:

Nathan, Emma, Ben and Grant have uploaded some exciting content to their blog sites, which are accessible via the UWS Schools Spectacular Facebook page - hosted and moderated by the University.

Blogger Ben says he has enjoyed his first blogging experience.

"Being able to share some of my experiences with everyone is such a great feeling, and capturing our journey shows how much enjoyment we share in building the performance for Schools Spectacular," says Ben.

"The experience also enables me to continue my passion for acting and allow me to try something different such as filming and editing a blog."

Grant is also enjoying the experience and says the video content gives others a new perspective to the Schools Spectacular process.

"The blogs are good ways to get more people involved and also let people see the hard work and dedication that goes into getting ready for the Schools Spectacular.

To further assist the students in documenting their Schools Spectacular experience, the University is also giving the students opportunities to meet and learn from current UWS students, academics and graduates and make use of the on-campus Music and Communication Arts facilities.

The Schools Spectacular sees more than 3000 students participate in months of rehearsals and sing, dance and play their way through four sell-out shows, which will also be broadcast into the homes of millions of Australians on ABC1 in late December.

The 2011 Schools Spectacular, Imagine, runs from 25-26 November at the Sydney Entertainment Centre.