World first discovery confirms model of the evolution of our Universe

Western Sydney University researchers have contributed to the first observation of a gas filament with a length of 50 million light years – confirming current ‘big bang’ ideas about the origin and evolution of the Universe. 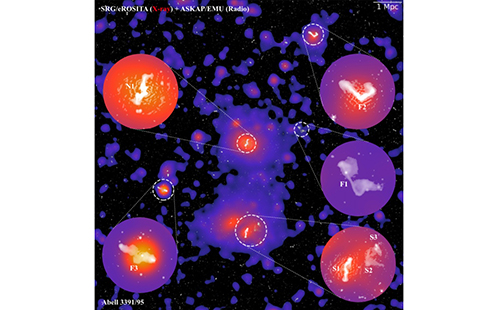 Australian researchers from Western Sydney University, Macquarie University, and Australia’s national science agency, CSIRO, have contributed to the first observation of a gas filament with a length of 50 million light years – confirming current ‘big bang’ ideas about the origin and evolution of the Universe.

The ASKAP telescope observations were made as part of the "early science observations" for a project called the Evolutionary Map of the Universe, also known as ‘EMU’ – one of nine major survey programs planned with ASKAP.

Professor Ray Norris from Western Sydney University said the EMU observations complement the eROSITA data, to reveal the striking richness of structure and activity in the merging cluster system.

“These observations of a system of galaxy clusters 700 million light years away from us detect a gaseous filament of the cosmic web, which is thought to pervade the Universe, but has so far eluded our telescopes,” Professor Norris said.

Professor Andrew Hopkins from Macquarie University said detecting a gaseous structure on this scale confirmed our model of how the Universe had evolved since the Big Bang.

“This model, called ‘Lambda Cold Dark Matter’, uses the combination of Dark Matter and Dark Energy to explain the way structures in the Universe should appear,” Professor Hopkins said.

“This is a great example of two international next-generation telescopes working together to do science that was not possible in the past.”

EMU is an international team of more than 400 researchers led by Professor Andrew Hopkins of Macquarie University. Team members include Thomas Reiprich, of Bonn University, who led the analysis of the eROSITA data, and former EMU project leader, Professor Ray Norris from Western Sydney University.

We acknowledge the Wajarri people as the traditional owners of the ASKAP Observatory site.