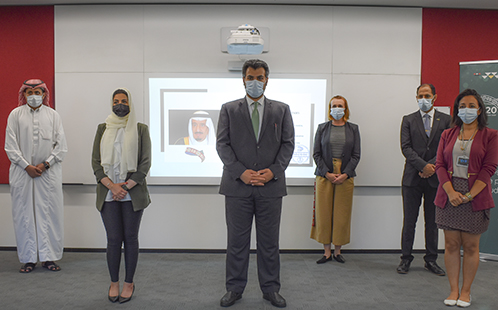 Western Sydney University was pleased to host the Royal Embassy of Saudi Arabia in Australia and the G20 2020 Saudi Arabia Group for a recent series of youth workshops at its Sydney City campus.

The event brought together university students from across Australia and Saudi Arabia, with those contributing from countries participating in the G20 — the premier international forum for global economic cooperation. The workshop was part of a series of cultural events presented by the Royal Embassy of Saudi Arabia in Australia and the G20 2020 Saudi Arabia Group this year, with Saudi Arabia serving as this year’s G20 leader, whose other member nations are Argentina, Australia, Brazil, Canada, China, France, Germany, India, Indonesia, Italy, Japan, Mexico, Republic of Korea, Russia, South Africa, Turkey, the United Kingdom, the United States and the European Union.

According to Dr Wael Alghamdi, the Youth Empowerment workshop’s event manager, the event: “aimed to discuss several topics that are of interest to the G20 group this year, including future skills; workplace opportunities and entrepreneurship; youth empowerment to produce agile, dynamic leaders in a changing world; inclusive decision making; and global concerns of multiculturalism and sustainable development.”

At the conclusion of the workshops, a summary of an agreed vision from the participants was submitted to the Y20 youth group.

Anna Krajewska, Director of Student and Academic Services at Sydney City campus, said: “as a welcoming and diverse community, we were proud to host this youth-focused event here at our campus.”

The University’s Sydney City campus offers students a range of undergraduate and postgraduate courses in business, arts, communication, engineering, IT, and health in the heart of Australia’s most cosmopolitan city. It has dedicated student teams who provide support to students from overseas who are studying in Australia, including students from Saudi Arabia.