Student filmmakers gear up for ‘Made in the West Film Festival’ 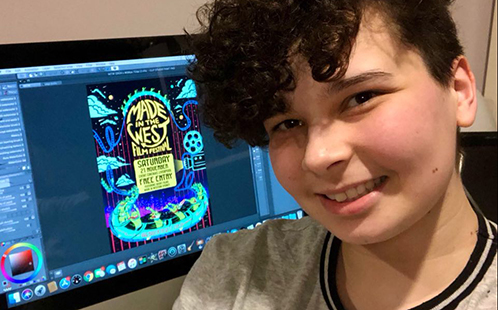 Western Sydney University students are following in the footsteps of talented alumni to make their own mark on this year’s Made in the West Film Festival – which aims to spotlight the unique western Sydney film scene and emerging talent.

The festival’s Artistic Director, Ross Page, is one of three graduates from Western Sydney University bringing the event to life for the ninth year in a row, alongside General Manager Misty McPhail and Event Coordinator Jay Knapp, who also studied at the University.

According to Mr Page, students from the University have made up a quarter of the quality entries received to the festival in past years.

“There are some great films being made here in western Sydney right now — including by students at Western Sydney University — and Made in the West Film Festival is providing a platform for those local stories to be seen by a wider audience,” said Mr Page.

“After such a challenging year, we’re looking forward to rolling out the red carpet and celebrating the creative work of western Sydney filmmakers.”

Along with submitting entries, several students have undertaken internship opportunities to support the production side of the festival.

Central Coast resident Emily Mumford, who studies the Bachelor of Communication / Bachelor of Creative Industries, has been working with Made in the West on their digital publicity campaign.

“I was lucky enough to create an online campaign for the festival. I contributed to social media content, wrote media kits and blogs, and in helping promote the event, learnt how to stay organised and on top of tasks,” said Emily.

Chiara Marshall from Hornsby is studying a Bachelor of Design (Visual Communication) and has worked on design elements for the festival’s promotion.

“It’s been a valuable learning experience and a great introduction as to what is expected in the professional graphic design field. Working on a real-world brief has better prepared me for a professional career,” said Chiara.

Associate Dean of Engagement for the School of Humanities and Communication Arts, Dr Rachel Morley, said Made in the West is a fantastic example of how Western Sydney University alumni can make their own creative opportunities.

"Misty, Ross and Jay built Made in the West nine years ago from the ground-up to address what was then a lack of opportunities for emerging western Sydney filmmakers. They saw a gap and thought, 'how can we make a difference?',” said Dr Morley.

"Together, they've worked to give back to the region's storytellers to help show the rest of the world what we've always known. That western Sydney has a rich and diverse creative energy, full of talent and innovation."

The Made in the West Film Festival supports short films from a range of genres, including documentary, music video, animation, drama, web series, sci-fi, and horror. Films will be judged by a panel of industry professionals, with finalists to feature in a double-cinema screening event on Saturday 21 November, and a digital screening on Saturday 28 November.

The University’s School of Humanities and Communication Arts is a key supporter of the festival, sponsoring the award for Best Student Film and providing access to its state of the art TV studio for the 2020 trophy winners, who will appear on the third instalment of Made in the West TV produced with WSU student crew.

For more information, visit the Made in the West Film Festival website (opens in a new window).