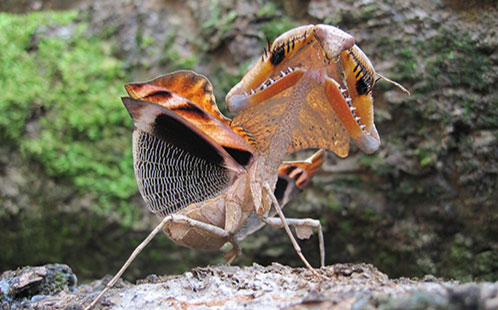 A new study has for the first time illuminated the evolutionary history of the bizarre anti-predator defence – the praying mantis startle display – and suggests that the element of surprise may be key to its success.

Dr Kate Umbers (opens in a new window), from the School of Science and Hawkesbury Institute for the Environment at Western Sydney University, said the aim of the study was to elucidate how startle displays have evolved over time across the praying mantis family tree.

“People have long been fascinated with startle displays – the elaborate performances that seem to enable some animals to deter or confuse predators,” said Dr Umbers.

“Many species, such as blue tongue lizards and mountain katydids, are known to defend against predators using startle displays – but the praying mantises are famous for their impressive sound production; striking displays of colour; elaborate movements of their arms and wings; and even opening mouths in threat.”

The results of the study, published the journal Proceedings of the Royal Society B (opens in a new window), have revealed that the displays seem be more complex in groups of closely related mantises.

“The praying mantises are diverse, and the complexity of their startle displays can differ substantially,” said Dr Umbers.

“Even within a species, an individual praying mantis can choose to vary their displays by mixing up different types of behaviours, or deploying different elements of their display in different circumstances.

“This is possibly because being different to the relatives with which they may share predators prevents those predators from learning what to expect and increases the protective value of the startle.”

Dr Umbers said the ways that mantises vary the complexity of their displays is significant, as behavioural traits are easily changed and this flexibility seems to be an important step in the evolutionary process. The challenge for scientists is getting the behavioural data for enough species to test these ideas.

“Data on behavioural traits is notoriously difficult for scientists to gather, as they need to be directly observed or induced in live animals and are only exhibited temporarily,” she said.

“The extremely valuable natural history observations published in the 1950s and 1970s have allowed us to compile this dataset. Gathering it today in a single project would take many years, extensive travel and reliance on local knowledge throughout Africa, the Americas and Australia.”

Dr Umbers said further studies are needed to elucidate the conditions under which startle displays evolve, including the type of habitat and the species’ natural predators.

“Next we need to figure out why exactly predators are so put off by these quirky performances. They have evolved so many times in different groups of animals – there could be some universal feature of predators that is being exploited,” said Dr Umbers.

A group of well-known Australian artists have completed an artistic expedition to a rare upland swamp in the Blue Mountains World Heritage Area, as part of Western Sydney University’s acclaimed ‘Painted River Project’.