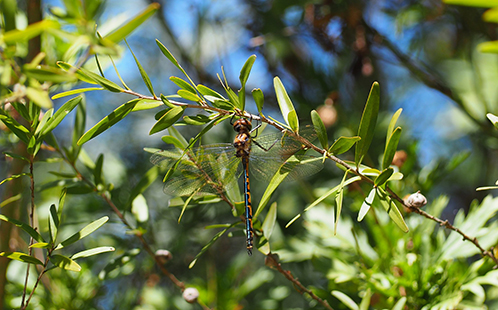 As evidence grows that insect species all over the world are under serious threat – more than 70 scientists from 21 countries have joined together to develop an international road map for insect conservation and recovery.

Dr Kate Umbers from Western Sydney University is one of the co-authors of a ground-breaking paper published this week in Nature Ecology & Evolution,(opens in a new window) which outlines the immediate, mid- and long-term actions that are required to reverse insect decline.

These actions form the ‘road map’ (opens in a new window) that the authors hope will be used by governments and conservation management agencies to inform farming, habitat management and urban development projects globally.

Dr Umbers, from the School of Science and Hawkesbury Institute for the Environment (opens in a new window) at Western Sydney University, helped to contribute the southern hemisphere perspective to the conservation road map.

“We cannot protect what we do not understand – and the reality, in Australia, is that 70 per cent of our country’s insect species have not been described, let alone researched and understood,” said Dr Umbers.

“When it comes to insects in Australia, we are operating with vast ‘unknowns’. Our Government needs to note the recommendations in the paper, and take urgent action.

“We need more investment in science and conservation. More jobs for scientists, and more research. Only then can we truly understand our nation’s biodiversity, and importantly, how to protect it.

“We can have a wonderful future in this country, in the world, with clean air and water, and biodiversity to enjoy and coexist with. To get it we must take serious action on climate change; invest in renewables; conserve our forests; rehabilitate cleared land; and be lead in these actions by science.”

The Nature Ecology & Evolution (opens in a new window) paper outlines a series of immediate, urgent actions and priorities to safeguard insect populations – such as reductions in land clearing and over-harvesting, and the recreation of habitats in local gardens.

For the mid-term, it is recommended that new experiments be planned, to clarify the impacts of human-induced stress factors and to gain knowledge in understudied areas, while longer-term actions include the formation of public-private partnerships and a global monitoring programme.

More than 70 experts from all continents contributed to the paper, including book author Dave Goulson and leading scientist Hans de Kroon. The lead author, Professor Jeff Harvey from the Netherlands Institute of Ecology (NIOO-KNAW) and VU Amsterdam, said the goal is to start insect recovery soon.

“As scientists, we want to gather all available knowledge and put it to action together with land managers, policy makers and everyone else involved,” said Professor Harvey.

“Essentially, we are thinking strategically and this is novel. Now and down the road, all to reverse insect declines.”

Dr Umbers is a Lecturer in Zoology at Western Sydney University’s Hawkesbury campus. Her research focuses on the mechanisms, functions and evolution of biological colouration, as well as more broadly animal behaviour, genetics, thermoregulation and mating systems. In 2017, Dr Umbers was named a Science and Technology Australia Superstar of STEM and was awarded an Australian Research Council (ARC) Discovery Early Career Researcher Award (DECRA). She is also Vice President of Membership Communications for the Ecological Society of Australia, Social Media Editor for the Behavioral Ecology journal, and on the board of the Invertebrate Conservation Council.

Researchers from Western Sydney University’s Hawkesbury Institute for the Environment will investigate mango varieties and their pollinators in India and Australia following an Australia-India Council (AIC) grant.