Western Sydney University’s The College graduate Joelle Sanounou has the opportunity to pursue a career she never thought was possible after being awarded the Australia for UNHCR Beddie Scholarship — a national scholarship supporting refugees in the creative industry to tell their stories through film.

Joelle arrived in Australia three years ago with her parents and sister as a Syrian refugee and now lives in Fairfield. Prior to this, she lived in Lebanon after fleeing the Syrian civil war which began in 2011.

“Living in Lebanon, day-to-day life — education, taxes and work – was a real struggle. Both of my parents became unemployed and my sister and I worked to support our family. It was horrible waking up every day, knowing that you had no future there,” said Joelle.

After arriving in Australia, 21-year-old Joelle was determined to focus on her education and build a better life.

“Schools in Lebanon taught English as a second language, but I wasn’t academically strong. So I did a three-month course of intense academic English and went on to enrol in the Diploma of Communication at The College,” she said.

“I always had something for art and creativity but not many opportunities to express myself. After a few media assessments during my studies, I quickly realised how strong my passion for film making really was.” 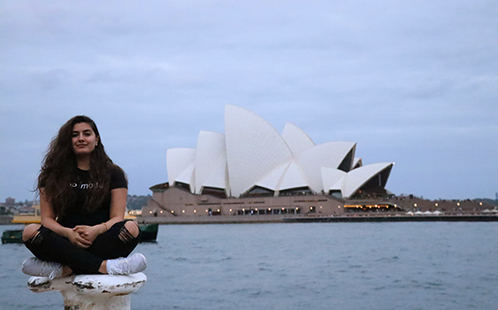 Joelle, who will now go on to study a Bachelor of Arts thanks to the scholarship, says completing her Diploma and the support she received from her lecturers at The College gave her the confidence and skills to enter the creative industries and to apply for the prestigious scholarship.

“This is one of the best things that has happened in my life and I look forward to starting further study,” she said.

“I already feel closer to my goals, and with grit, I believe I can make the best out of this scholarship.”

Khoa Tran, Lecturer at The College, said: “During my time teaching Joelle, I found her to be a hard-working and passionate student with a genuinely positive attitude towards learning. I’m proud to have been one of her teachers here at The College and wish her the best of luck for the future.”