Seven remarkable women were recognised at Western Sydney University’s Women of the West Awards, hosted at a Coleman Greig Women in Business Forum.

Rosie Batty AO, former Australian of the Year and family domestic violence campaigner, presented 2020 Women of the West Awards to Pat Hall and Rosemary McKenzie-Ferguson, who were named joint recipients of the Woman of the West (Business) Award; Bev Jordan, announced as Woman of the West (Community); and Sampavi Sivakumar, awarded Young Woman of the West. Ruby Campbell (Community), Anyier Yuol (Youth) and Aimee Paananen (Youth) were Highly Commended.

Western Sydney University’s Acting Senior Deputy Vice-Chancellor, Professor Denise Kirkpatrick, congratulated the nominees and winners, and welcomed the Awards as an opportunity for the University to give back to its community.

“We are proud to support the Women of the West Awards as part of our celebration of International Women’s Day,” said Professor Kirkpatrick.

“Women across our community undertake crucial work as professionals and volunteers. This year’s nominees and winners demonstrate the outstanding skills, ideas and experiences women across Western Sydney bring to their work and community.”

MC of the lunch, and Principal of Coleman Greig, Caroline Hutchinson, was delighted with the success of the event. “Having the opportunity to hear Rosie Batty speak about her experiences was so moving and inspiring - particularly in light of so many domestic violence related events that we have seen in the media recently. She is certainly a noteworthy advocate, not just for domestic violence issues, but also for social change and gender equity.”

Western Sydney University congratulates the Award recipients and those who were Highly Commended. 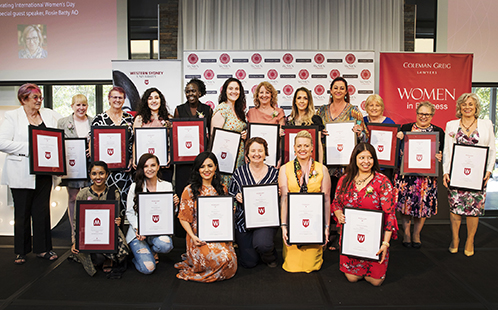 Nominees and winners of the 2020 Women of the West Awards

Pat Hall and Rosemary McKenzie-Ferguson were named dual recipients of the Woman of the West (Business) Award.

Pat Hall is the CEO of Liverpool Neighbourhood Connections (LNC), overseeing its core business and the operations of six social enterprises. She was recognised for her sustained contribution to the LNC and for her extensive work in establishing and supporting social enterprises.

Parramatta resident Rosemary McKenzie-Ferguson is internationally recognised for her service to the injured worker community. The award recognises Rosemary’s resolve to make a difference for people in Western Sydney who, like her, face the challenge of returning to life, community and employment after a work place injury.

Bev Jordan was announced as Woman of the West (Community) Award winner, with a Highly Commended recognition presented to Ruby Campbell in the same category.

Bev Jordan is a freelance writer and a committed volunteer who uses her skills as a journalist of thirty-five years to draw attention to the work of not-for-profits, service groups, and fundraisers, particularly in The Hills area. Bev was recognised for her broad and sustained contributions to Western Sydney and the significant impact of her work as a reporter.

Ruby Campbell has over fifty years of experience in both paid and volunteer work in Western Sydney, including as a Senior Constable in the NSW Police Force working predominantly with juvenile girls, and with the Anglicare Family Support Team. Ruby was recognised for her work to improve people’s lives, particularly in the Mt Druitt community.

Three exceptional women were recognised in this year’s Young Woman of the West Award.

Parramatta resident Sampavi Sivakumar, who was awarded Young Woman of the West, is a passionate advocate for equality and empowering marginalised communities. She is the founder of humanitarian project C.O.E.X.I.S.T and a dedicated volunteer for many organisations across Western Sydney. A Western Sydney University physiotherapy student, Sampavi was acknowledged for her extensive volunteer work and contribution to the University community, her professional field and the broader region.

Anyier Yuol, who received a Highly Commended recognition, was born in a refugee camp in Kenya and is undertaking her PhD at Western Sydney University. The Blacktown resident was recognised for her work as a Youth Transition Support Worker at the Community Migrant Resource Centre and as Founder and CEO of the Miss Sahara Pageant social enterprise and Anyier Model Management.

Aimee Paananen, also Highly Commended, established a nut-free beauty salon using her own experience with anaphylaxis to support others. Aimee, who is based in the Hawkesbury area, was recognised for her business development work and strong contribution to the confidence and financial independence of many young women in the region.