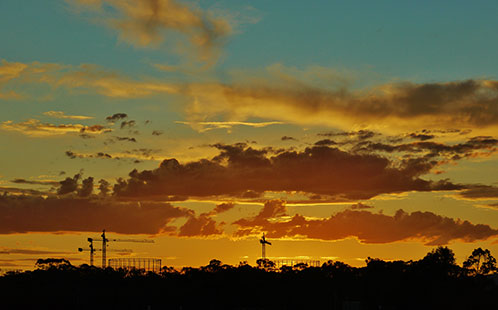 Carbon dioxide (CO2) is sometimes described as "food for plants" as it is the key ingredient in plant photosynthesis. With CO2 concentrations in the atmosphere increasing steadily due to human emissions, there is ample evidence that plant photosynthesis is going up. Experiments in which single trees and young, rapidly growing forests have been exposed to elevated CO2 concentrations have shown that plants use the extra carbon acquired through photosynthesis to grow faster.

However, scientists have long wondered whether mature native forests would be able to take advantage of the extra photosynthesis, given that the trees also need nutrients from the soil to grow. This question is particularly relevant for Australia, where our iconic eucalypt bushland is usually found on soils that are low in phosphorus, a vital nutrient required alongside the extra carbon to supply plant growth.

In the first experiment of its kind applied to a mature native forest, as well as the first in the Southern Hemisphere, Western Sydney University researchers exposed a 90-year old eucalypt woodland on Western Sydney’s Cumberland Plain to elevated carbon dioxide levels.

"Just as we expected, the trees took in about 12% more carbon under the enriched CO2 conditions," said Distinguished Professor Belinda Medlyn at the Hawkesbury Institute for the Environment (opens in a new window).

"However, the trees did not grow any faster, prompting the question 'where did the carbon go?’".

Some intensive detective work was needed. The researchers combined their measurements into a carbon budget that accounts for all the pathways of carbon into and out of the EucFACE forest ecosystem, through the trees, grasses, insects, soils and leaf litter. This carbon-tracking analysis showed that the extra carbon absorbed by the trees was quickly cycled through the soil and returned to the atmosphere, with around half the carbon being returned by the trees themselves, and half by fungi and bacteria in the soil.

"The trees convert the absorbed carbon into sugars, but they can’t use those sugars to grow more, because they don’t have access to additional nutrients from the soil. Instead, they send the sugars below-ground where they 'feed’ soil microbes", explained Professor Medlyn.

These findings have global implications: models used to project future climate change, and impacts of climate change on plants and ecosystems, currently assume that mature forests will continue to absorb carbon over and above their current levels, acting as carbon sinks. The findings from EucFACE suggest that those sinks may in actual fact be weaker or absent for forests on low-nutrient soils.

Lead author of the study, Dr Mingkai Jiang, said that "Overall, long-term exposure to increased levels of carbon dioxide can only increase carbon storage in ecosystems with younger tree stands or more fertile soils. That’s really important, because we are currently relying on mature forests to take up some of the additional carbon dioxide we are emitting. Our findings suggest that we have even less time than we thought to bring down greenhouse gas emissions."

The research is published in Nature. (opens in a new window) Opinion: It’s 2am, you’re sleeping, and a flash flood hits your home. Without a warning system, what do you do?

In March 2019, a powerful storm hit southern Nepal. Residents in the Bara and Parsa districts had little warning. They sheltered in huts made from mud and brick which collapsed in the wind and rain.