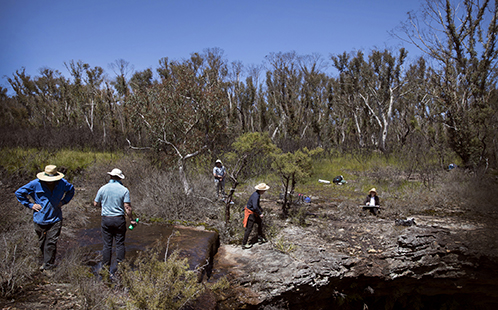 A group of well-known Australian artists – including Reg Mombassa, Adrienne Richards, Euan Macleod and Leo Robba – have completed an artistic expedition to a rare upland swamp in the Blue Mountains World Heritage Area, as part of Western Sydney University’s acclaimed ‘Painted River Project’ to record and conserve the unique environment.

Dr Leo Robba, who is the project’s founder and lectures within the School of Humanities and Communication Arts, said the expedition aimed to bring together art and science to increase awareness for the ecological significance of the wetland, which is home to endangered species, such as the Giant Dragonfly and the Blue Mountains Water Skink.

In addition to highlighting the wetlands mid recovery from last summer’s bushfire crisis, Dr Robba said artworks created over two days on location between Leura and Mount Hay, will be featured on social media to mark the beginning of another bushfire season.

“The artists captured the burnt bush as a result of last summer’s unprecedented bushfires, but also the encouraging signs of flourishing regrowth,” said Dr Robba.

“I was fascinated by what each artist chose to focus on. Reg, for example, made several bold sketches of hollowed-out trees and the charred recovering landscape.”

Water expert Dr Ian Wright from the School of Science has researched the unique swamplands of the Blue Mountains for years.

“The site has enormous conservation significance, containing some of the purest water in the Sydney Basin,” said Dr Wright.

“The artists painted at the edge of a rare and fragile freshwater wetland, where the water seeps from the lowest margin of the wetland and cascades over a cliff.”

“Human development in the Blue Mountains has major detrimental impacts on the area’s fragile swampland ecosystems, but luckily this swampland is protected to a degree by surrounding National Park — this expedition is one step towards raising awareness for conservation.”

The artworks will feature in an upcoming publication, Ways of Seeing: LAND, WATER & HEALING: The Art of Planetary Health, that will coincide with the Greater Blue Mountains region’s 20th anniversary of its UNESCO World Heritage Listing.

Opinion: ‘War in space’ would be a catastrophe. A return to rules-based cooperation is the only way to keep space peaceful

In 2019, US President Donald Trump declared “space is the new war-fighting domain”. This followed the creation of the US Space Force and a commitment to “American dominance” in outer space.