Across the Atlantic: Phoenicians found to have influenced early Germanic people 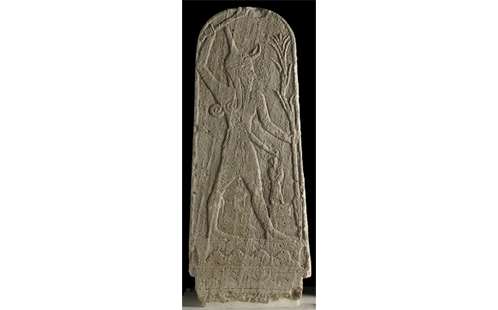 The mighty Carthaginian god Ba’al, who was taken over by the Germanic people as Phol and Balder.

In a new linguistic and cultural study, Western Sydney University and University of Munich researchers explore the unexplained elements of early Germanic to discover the language was likely influenced by interaction with ancient Phoenicians from the powerful city of Carthage over 2,000 years ago.

Authored by Associate Professor Robert Mailhammer, School of Humanities and Communication Arts at Western Sydney University, and Theo Vennemann from the University of Munich, The Carthaginian North: Semitic influence on early Germanic hypothesises that the ancestor of all Germanic languages, Proto-Germanic, was in intensive contact with Punic, the Semitic language of the Carthaginians, when outposts were established for trade on the coastal areas of present-day Northern Germany and southern Denmark.

According to Associate Professor Mailhammer, this intensive contact between early Germanic peoples and Carthaginians offers a plausible explanation for longstanding puzzles of Germanic linguistics and culture.

“Our theory and the supporting evidence has ground-breaking implications for the cultural history of the Germanic people. Our findings prompt further investigation in linguistics and archaeology and genetics but the presence of Carthaginian colonies in Northern Europe, at a time when Greek classical antiquity was at its height and when the Romans were only starting out, is a significant find,” said Associate Professor Mailhammer.

Through linguistic and interdisciplinary data, including the commonality of highly implicative words from war and government, and evidence from the writing system, the book highlights how a Punic influence on early Germanic is supported by common linguistic traits and broader historical evidence.

“It is striking that the unexplained innovations of Proto-Germanic find such close parallels in Punic, which are hard to put down to coincidence. This is clearest in the writing system, but the other areas are also very significant, especially the strong verb system. The data forms an evidential mosaic, where different types of evidence interrelate,” said Associate Professor Mailhammer. 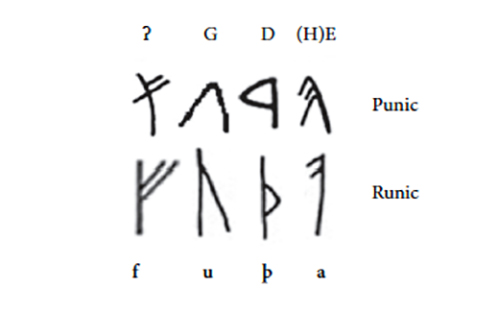 The striking similarity between the Carthaginian and Runic alphabet demonstrated in the first four letters.

Despite beliefs Germanic tribes were dominant in their interactions with the early peoples of Europe, Associate Professor Mailhammer explains the analysis shows the Carthaginians were culturally superior and left significant traces in various aspects of Germanic culture, including the language, writing system and religion, still visible today.

“Following defeat in the Second and Third Punic Wars, Punic influence and dominance gradually waned. However, some Punic influence manifested in ancient Germanic persisted and became part of Proto-Germanic. Punic influence was likely even more backgrounded during a period of “Re-Germanicization”, suggesting its influence, in reality, could have been far more pronounced,” said Associate Professor Mailhammer.

The book presents a new theory on the history of early Germanic that accounts for some of the unknowns in the lexicon, grammar, religion and the writing system of Proto-Germanic. It also highlights the benefits of an interdisciplinary approach to studying language where linguistics and cultural analysis intersect. Its results suggest that the history of the early Germanic people needs to be re-written.

The Carthaginian North: Semitic influence on early Germanic is available here (opens in a new window).