The University of Western Sydney presents Community Awards at graduation to recognise outstanding individuals within the Greater Western Sydney region.

UWS is pleased to acknowledge and thank the following people who are valuable roles models in the community and have gone 'above and beyond' in their work or community service: 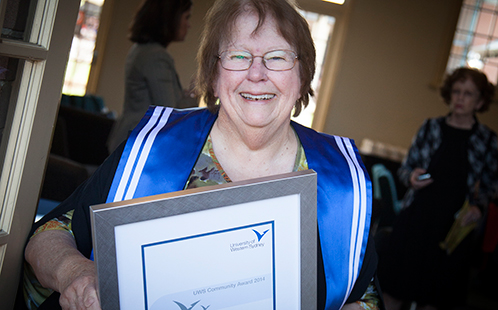 Diana Aspinall, a 2014 Women of the West nominee and a resident of Katoomba in the Blue Mountains, has been nominated for her leadership and advocacy in health for the people of Greater Western Sydney.

Ms Aspinall has lived in the Blue Mountains for the last 18 years and is currently the Board Director of the Nepean Blue Mountains Medicare Local. As a retired nurse, she has developed a deep understanding of the local Blue Mountains community and its needs.

Ms Aspinall has a varied background in consumer health advocacy at national, state and local levels. She has given voice to consumers by helping them build capacity to become active participants within the health system and to manage their own health care. An example of her recent work was a local consumer lead research project – 'The Evaluation of Blue Mountains Cancer Help'.

She is also Chair of the Interim Nepean Blue Mountains Medicare and LHD Health Consumer Committee, as well as a member of several other health boards on both a local and national level.

Jason Pilgrim is a graduate of the University of Western Sydney and holds a Bachelor of Applied Science (Sport and Exercise Science) degree. He is a strong economic and social advocate for the Hawkesbury region, and actively works to increase local tourism.

As President of the Hawkesbury Chamber of Commerce for the past three years, along with holding several other prominent volunteer positions, he has worked tirelessly to improve the economic climate of the Hawkesbury and surrounding areas after several difficult years of bushfire and flood.

Mr Pilgrim was instrumental in bringing the International Sand Sculpting Competition to Hawkesbury, along with the highly successful 'Shop, Stay, Play: Support Local' campaign, and he has quickly become one of the area's most prominent business leaders.

He is also the owner and Managing Director of In2 Motion Physiotherapy and Exercise Physiology, a four-time internationally awarded Allied Health team in Richmond, that works to improve the rates of chronic illness within the community.

Previously he worked for NSW Institute of Sport, Triathlon NSW and the Department of Sport and Recreation as a sports scientist. He also volunteers his time with not-for-profit organisations and is currently the National Treasurer for Exercise and Sport Science Australia. 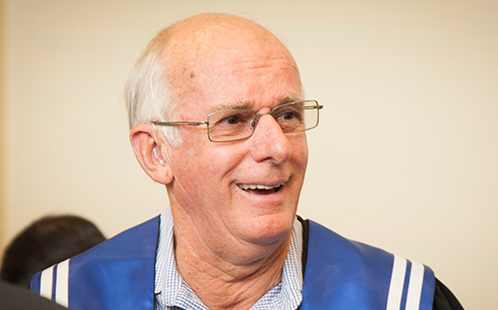 Ken Barnard has worked tirelessly in the Macarthur area, helping others for over 15 years. He is a hard working member of the Ingleburn Rotary Club and volunteers his time and expertise in assisting many less fortunate members of the community. He has shown extraordinary leadership in bringing hidden and often difficult issues like homelessness and depression to the community's attention.

Mr Barnard joined the Macarthur Real Estate Engagement project, an initiative aimed at improving working relationships between local Real Estate Agents and Support Services to help the homeless and those facing tenancy eviction. His role has been instrumental in the project's success by using his extensive professional network of real estate contacts to improve tenancy rates. In the first twelve months of operation, 43 tenancies were saved.

As well as providing the project with good advice and guidance, he has also become a vital member of the Macarthur Homelessness Steering Committee that aims to highlight the plight of those sleeping rough, and the many other forms of homelessness.

Mr Barnard's work has directly contributed to the shifting societal perceptions of homelessness in the area and is making a difference to disadvantaged people in the Macarthur region. Loleta Tiedermann is a mother of five children and for more than six years has been committed to community engagement initiatives in the Greater Western Sydney region. She has been an advocate and mentor to young people, women and their families, especially those from South Pacific backgrounds living in the Mount Druitt area. Ms Tiedermann currently works with St Vincent de Paul Society NSW as a Social Justice Representative for the Emerton Conference in the Mt Druitt area.

Her passion, dedication, persistence and guidance has resulted in empowering a group of Pacific Islander mothers to establish a small service called 'Pearls of the Pacific', a not-for-profit service for mothers with young children to come together to better support their children and their families.

Since the program began, Ms Tiedermann has been developing fundraising strategies and assisting mothers in finding work, saving money and completing further education. Several women have completed further education and many have found meaningful employment. Over the years the numbers of participants have increased significantly.

In her role at the St Vincent de Paul Society, Ms Tiedermann is a strong advocate for her clients, ensuring appropriate accommodation is sought for mothers and their children. She continues to provide reassurance and support until her clients are physically and emotionally stable.

Ms Tiedermann has also established a partnership with the Consulate of the Solomon Islands and other consulates to promote young talent and provide financial support for education to Pacific Islander young people.