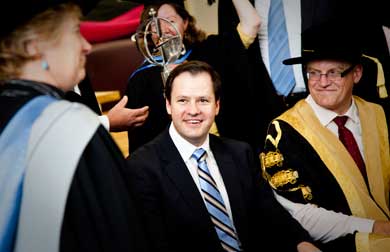 In 2010, Ed was elected as the Federal Member for Chifley in Western Sydney. He is also Government Whip in the Australian Parliament. Ed grew up in Greater Western Sydney, and as a UWS Bachelor of Arts (Applied Communications) graduate, he is the first UWS alumnus to be elected to Federal Parliament. Ed has worked across both the public and private sectors, and has been a keen advocate for his local community. He serves on a number of parliamentary committees including the Joint Standing Committee on the National Broadband Network.

A transcript of the Occasional Address, delivered by Ed Husic:

"At the outset I want to clarify something:

Vice-Chancellor Professor Janice Reid has a terrific sense of humour.

Today, as students graduate from the Schools of Engineering, Computing and Mathematics, the Vice-Chancellor has asked that I, a dreaded Humanities graduate, deliver the Occasional Lecture.

I was half expecting the song "Why can't we be friends" to be played as I was walking to the lectern.

So here we are, the battle of the brain is joined - the struggle between left hemisphere and right.

But in every battle, there has to be a victor - so, on behalf of the humanities, I'll be delivering the address thanks.

Having said that I think the future of this country will actually rest in a synthesis between our disciplines:

Words not spoken for their own sake - but recognising that pairing of these talents will have real meaning for the nation into the future. Allow me to return to this later.

The honour you have so kindly given me today is special on many levels.

Because, in a way, I'm celebrating another 21st.

This time, 21 years ago, I was in your shoes. Graduating from this great institution.

At the time, I was playing two roles - that of graduand and that of statistic… an experience I suspect many of us in this room will share.

21 years ago I was the first member of my immediate family to finish a university degree.

My parents emigrated here in the 1960s from then Yugoslavia. When I reached for that degree, it was rare that the fingers of my family would do so.

And you can imagine how proud my Dad was that his son, the boy he wanted to see as a Doctor, was holding a Bachelor of Arts (Applied Communications) Degree.

But together can we celebrate this fact: ….more than half… half… of commencing students from UWS are the first in their families to attend university.

I'm the product of a blue-collar worker and mother who taught herself English - and my heart fills with pride knowing that nearly 8,000 students across the UWS campuses (a record 23 per cent of total enrolments) come from lower income backgrounds.

This Institution has positively shifted the futures of so many in Western Sydney.

It has fulfilled the great ambitions set for it when it was created back when Bob Hawke was Prime Minister of this nation; at a time when representatives like the one I followed - Roger Price - were enthusiastically pushing for our own university.

Families and graduates will rightly savour this day in their own way, but for me these realities are worth so much.

Standing in this place today, I sense the energy and prospects for our region and our country.

Because in the major challenges that will require our intellect and imagination, the people here will be at the fore. For example, in this room there will be those who:

For me, the issue of connection is motivating.

So much of our lives will rest on the pulse of light travelling down optic fibre, or a signal that travels through the air or bounces through our homes and workplaces.

That pulse; that signal; that vessel for data - the lifeblood of the internet - transforming societies in the way it travels: quickly.

At a time when ships heave their way out of our ports, heavy with our mineral resources, it's worth noting that as many people are employed in Australia as a result of the internet as they are from our mines.

According to Deloitte Access Economics, the direct contribution of the Net to our economy is predicted to bloom 7% over the next five years - increasing from $50bn now to $70bn.

And as 20% more Australian homes get connected to the net in that time, the value of the Internet to our economic growth bumps up 1 per cent.

There will be those that say the internet is just a plaything to help download a song or video.

The stats will tell you that last June we downloaded 274,000 terabytes of data - 44GB pper home. Triple the amount accessed three years earlier.

But Rhianna and YouTube can't be solely responsible for that.

Because homes and individuals know that the Net's helping us find information quicker, letting us work smarter and save on us a precious resource: time.

The ability to track down information, to be more efficient with our spending, amounts to about $500 per person - $7bn nationally.

We're more productive in our workplaces because of this: in 2011 it was calculated that business and government generated $27bn in value through productivity benefit.

By comprehensively renewing our national communications infrastructure via the rollout of the National Broadband Network - combined with the smarts of our own citizens - this country aims to be one of the world's leading digital economies by 2020.

And, coming back to a theme I touched upon earlier, we all can play a part in this. We are already.

Many people wouldn't know this - but Australians sitting in cafes or airports or homes, their laptops, smartphones and tablets inhaling Internet signals through their wi-fi connections, can thank our very own CSIRO for coming up with that technology.

And the engineers, computer scientists, mathematicians are all driving this behind the scenes - their numbers swelling in number today with the addition of today's graduates to their ranks. But the yang to the network yin is content.

Left-brainers might take the lead devising the technology, building networks - but at some point right brainers step up for the content. And this process is as much sequential as it must be collaborative.

This content of nearly 23 million is often said to be punching above its weight internationally. But with you, I hope we can replicate this in our region of 1.6m - accelerating innovation and economic growth via the net.

The big aim for us to have centres of research excellence out West, Pushing the boundaries of technology in facilities located out here.

The greater dream is to see ICT corridors open up in Western Sydney, a springboard for your talent, attracting talent from around the nation and the Asia-Pacific itself.

But dreams only remain in an abstract domain until people act upon them - a task before us now. Enough of thinking ahead. Today is about celebrating the years of effort that have brought you to this hall.

It is also about taking the time to cherish a gleam in the eye of a family or friend that is proud of your achievement - and us thanking them for the warmth of their support of you. And to once again commend and pay tribute to UWS for transforming lives and enriching our region.

Thank you for allowing me the privilege of being in your presence on this day of memories."