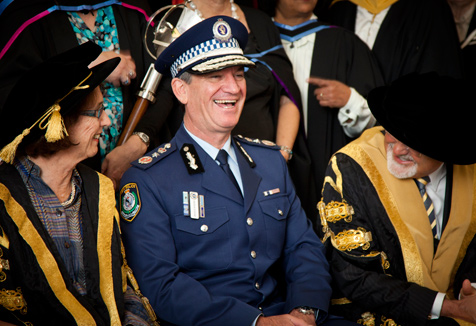 Commissioner Scipione has had extensive experience in law enforcement.  His career began with a period of employment with the Australian Customs Service. In 1980 he joined the NSW Police Force, and following experience in general and traffic duties, he worked as a detective in the Criminal Investigation Branch (CIB) and was  seconded to the National Crime Authority in 1985.

In 1992 he was appointed to the rank of Detective Inspector at the Joint Technical Services Group and in 1995 was promoted to the rank of Detective Superintendent (Commander) at the Special Technical Investigation Branch. During this period, he was also a Senior NSW Police Counter Terrorist Advisor to the Standing Advisory Committee for Commonwealth/State Cooperation for Protection Against Violence.

Since then he has held a range of positions, being appointed Deputy Commissioner in 2000 and Commissioner of Police in 2007.

Commissioner Scipione is a recipient of the Australian Police Medal and the National Medal.

Commissioner Scipione holds the role of Adjunct Professor here with the University’s School of Social Sciences and Psychology.

The Commissioner is married to Joy and they have three children. Away from his official duties he enjoys surfing, camping and spending time with his family.

But most importantly, our graduates.  Let me begin by congratulating to every one of you on the completion of your studies.  Well done to all of you.

I know that today is going to be a memorable day for you all, and I’m sure that it will also be a very important one.

It’s memorable because of the personal milestone that you have now achieved.  You’ve put in the long hours and study … you’ve met all of the academic requirements … and today you have the opportunity to share your achievement with your family … your friends … and your peers.

But it also an important day because of the opportunities and the choices that now lay ahead of you.

How will you take your course of study and apply it to your working life?

What differences can and should it make to your chosen discipline?

Do you want to progress on to further study … or perhaps catch your breath for a while and then think a little more about the future?

One chapter draws to a close … and you now have the opportunity to play a large part in directing the next chapter.

It’s traditional at graduation ceremonies for a keynote speaker to offer some inspirational words to the graduates as they contemplate those choices.

And when I thought about what sort of motivational address I could possibly make, my thoughts kept coming back to the people who have motivated and inspired me in recent years.

I’m in the fortunate position of hearing inspirational stories almost every working day.

And so what I’d like to do is very briefly tell you about just three of the many people who have had a significant impact on me in recent times.

I’ll start with the most recent.  A routine traffic stop for one of our police officers that took a horrible turn.

On the morning of Thursday the 2nd of March 2012, Senior Constable David Rixon was patrolling in West Tamworth when he had cause to pull over a vehicle.

As he would have done so many times before, David turned on the recording device in his top pocket and approached the vehicle.  The audio from that recording tells a chilling story.

Without provocation … the male occupant of the vehicle drew a weapon and opened fire.

Senior Constable Rixon suffered gunshot wounds that would claim his life. He left behind a wife and six children.

And yet, despite being mortally wounded, David Rixon managed to return fire and commence securing the offender with his handcuffs before he collapsed.

A police officer … dedicated to the safety and protection of others … right to his final breath.

On the 11th of January 2011, Constable Rahsan Keles was hit by a semi- trailer while conducting traffic duties and was dragged 20 metres.  Rahsan’s spine was fractured and both of her legs were broken.  The damage to them so bad … doctors considered amputation.

Much of what happened to Rahsan that night is vague.  But she remembers the blurred lights of the road through sheets of rain … she remembers pulling her rain coat over her head as she radioed the station.

And she remembers her own screams as she was dragged more than 20 metres by the runaway truck.

The estimates from Doctors are that it could take up to two years before Rahsan regains the full use of her legs.  But after numerous operations and six months of intense physiotherapy Rahsan returned to work at Auburn Police Station in September of last year.

Back to a crime management role … with the goal of a full return to the front line.

The third person … a member of the public and the victim of an incredibly vicious crime … Lauren Huxley.

On the afternoon of the 9th of November 2005, 18 year old Lauren Huxley was attacked in her home in Northmead, Sydney.  The house was on fire when she was found unconscious … lying on the garage floor bound and gagged with horrific head injuries and covered in petrol.

Lauren would undergo extensive surgeries and rehabilitation for the injuries she sustained.

The detective who led the investigation … a criminal investigator for almost 10 years … said that nothing could fully prepare them for the horrendous nature of the attack.

The offender had every intention of finishing off his victim and there’s no doubt he thought he had succeeded.

But she did survive … and I was eventually able to meet with Lauren and her family.

Lauren told me that she had been studying marketing at TAFE, and I was able to offer her the chance to build her experience within our Public Affairs Branch.

Lauren accepted the offer and joined us at the end of July 2008.

She became an invaluable member of the team and she worked on various crime prevention and youth projects.  The opportunity allowed her to not only get some exposure in her chosen career path, but to develop a greater sense of self confidence and independence after her ordeal.

After that Lauren went on to complete further study and she now has a part-time job at a sport and travel agency which she says is going really well.

In the early days and weeks of recovery after Lauren was attacked, her parents were told that she would not be able to walk, talk or eat unaided.  From that very grim night they cannot believe the progress Lauren has made … but they firmly believe that much of it is due to her positive outlook and her will to just get on with life.

When I last met with Lauren she was still facing further surgeries but she told me she believed in looking forward and never back on what has happened.  She has every intention of having a full and productive life and … one day … a family of her own.

Two police officers and a member of the public.

Three ordinary people who showed extraordinary strength and resolve.  And every day I see more.  Many more

Thankfully very few come from such horrendous circumstances … but nonetheless, each is extraordinary in its own way.

Where does that resolve come from?

And what strength, determination and resolve lies within each and every one of us?

There’s a saying: what lies behind us … and what lies before us … are tiny matters compared to what lies within us.

Today signals the end of a course of study for each of you.  You’ve earned the right to graduate.

For all of you, that would have involved some effort … some challenge … some resolve.  And I’ve no doubt that for some of you, it required some struggle.

But you made it.  You juggled the demands … you relied on your skills … your intelligence … and your reserves.  And you now add another achievement to your resume.

Quite possibly there will be times of struggle and adversity ahead.  And I pray that none of you faces challenges of the magnitude that I’ve just shared with you.

But importantly, there will be personal growth, opportunities and choices.  Some that will come about as a direct result of your graduation.

How you approach those … the strength and the determination that you exhibit, will be a matter for you.

But be assured that the right stuff lies within each of us.  Some are called to display it in very stark and dramatic ways … others less so.  But it is still there in every one of us.

Ordinary people can and do perform extraordinary things.  I’m in the fortunate position of seeing that almost every day.

And it never ceases to amaze me.

Again, congratulations to our graduates … well done to each and every one of you.