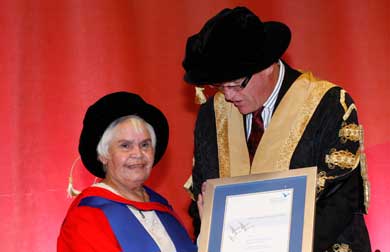 Aunty Mae Robinson, an Aboriginal Elder and long time resident of Mt Pritchard, has been recognised with a UWS community award for her contributions to the education and the wellbeing of Aboriginal and Torres Strait Islander peoples.

Over the last 30 years, Aunty Mae has held various positions within the education system, in which she has worked tirelessly to provide Aboriginal and Torres Strait Islander young people with opportunities and access to education, as well to raise awareness of the their rights.

In the early 1980s, Aunty Mae became the first Aboriginal individual to graduate from the School of Education at the Milperra College of Advanced Education (later a part of UWS), which she did as a mature aged student and mother.

Aunty Mae went on to teach in GWS primary schools and was appointed to Education Officer and consultant positions with the NSW Department of Education and Training. Since retiring Aunty Mae continues to consult with local Aboriginal communities.

She is an advocate for the value of education as a transformative force.  Aunty Mae has received many prestigious awards for her work in advancing education, and she is an Ambassador for ‘Dare to Lead’ (a Commonwealth funded national program with a focus on improving educational outcomes for Aboriginal Students) and has been actively involved in the program since it began in 2000.

Aunty Mae has used her vast knowledge of Aboriginal culture and issues to support awareness raising and Aboriginal student achievement in schools throughout the South West. She is considered a connector of cultures, recognised for her drive and passion, and has made a genuine difference through education.