First sods turned on vertical campus in the Bankstown CBD 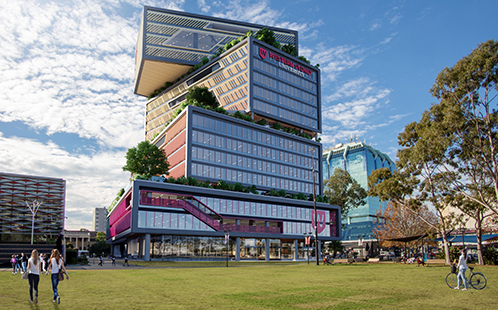 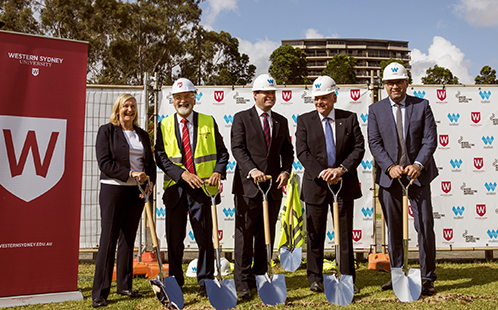 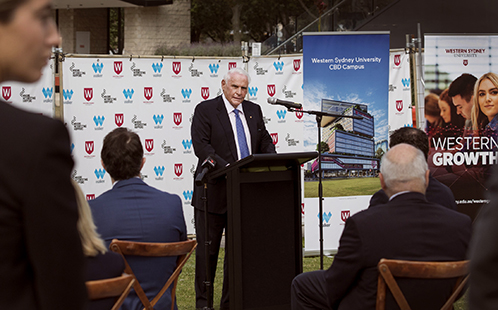 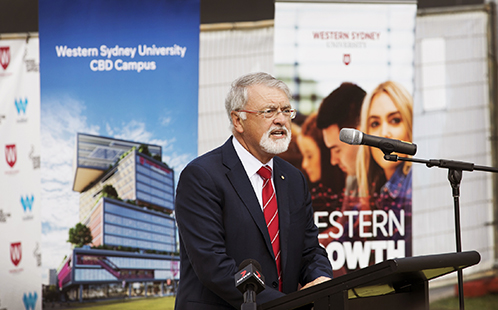 The first sods have been turned on Western Sydney University’s newest vertical city campus in the Bankstown CBD, triggering the creation of hundreds of new jobs and boosting the economy of South West Sydney.

The University has partnered with Walker Corporation to deliver its $340 million Bankstown City campus, which is expected to create 675 direct and indirect jobs during construction.

Minister for Jobs, Investment, Tourism and Western Sydney, The Hon Stuart Ayres MP, was present for the ceremonial ground breaking for the campus, which will have capacity for up to 10,000 students and 1,000 staff when it opens in the second half of 2022.

Some of the key campus features will include:

“The $340 million Bankstown City Campus will make a significant contribution to the economic strength of South West Sydney and give NSW’s economic recovery a huge and timely boost,” said Mr Walker.

“When the campus is complete and fully activated, it will deliver about $140 million a year in additional economic uplift to the Canterbury-Bankstown economy and the wider region.

“The campus will also be one of Sydney’s most well-connected places with the future Sydenham to Bankstown Metro line on its doorstep.”

Vice-Chancellor and President, Professor Barney Glover AO, said the campus is latest in the University’s suite of world-class, vertical campuses for the Western Sydney region.

“Like the Parramatta City and Liverpool City campuses, the Bankstown City campus will offer highly-accessible, technology-rich teaching and research facilities, and will provide our students with the opportunity to engage in work-integrated learning and collaborative research partnerships,” said Professor Glover.

“The campus will bring students into the town centre, connecting them with local business and industry and embedding the University in the economic, social and civic life of Bankstown.”

Minister Ayres said this is another significant milestone for Western Sydney demonstrating its growth and importance.

“The turning of the sod on Western Sydney’s newest vertical campus means more opportunities for locals to study, work and play in their own backyard. The development and continued operation of this campus is a welcome boost for jobs and will become an important role in the recovery of the State,” said Mr Ayres.

The campus is part of the University’s ‘Western Growth’ strategy – an ambitious program that is reshaping the University’s campus network and co-creating cities and transformative educational infrastructure across Western Sydney, in partnership with industry and government.

The project is located between Bankstown’s Council administration building, library and knowledge centre. Award-winning architects Lyons have designed the campus, which aims to achieve a 5-star Green Star rating.

“Such a development is a massive win, not only for Canterbury-Bankstown but Western Sydney,” said Mayor Asfour.

“It will inject millions of dollars into the local economy every year, creating more local jobs, and further supporting Canterbury-Bankstown’s status as an education and health precinct.”

Some of the building’s sustainability features include the capture and re-use of rainwater, as well as innovative thermal and lighting systems and solar roof panels.