Why Tumblr fosters deep and enduring forms of intimacy online 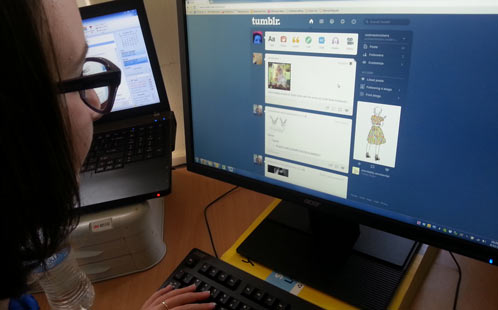 The following opinion piece by Matthew Hart and Amanda Third was first published at Online Opinion.

Young people will always find spaces to call their own. In days gone by, this could have meant meeting up with your friends to hang out at the park or play the latest games at the arcade. These were spaces that young people actively claimed, and sometimes struggled over, beyond the authoritative gaze of adults.

Now, in addition to these more conventional spaces, young people also log onto social platforms like Tumblr to forge their own spaces online and make meaningful connections, all from the comfort of their bedrooms.

Launched in 2007, Tumblr is a microblogging social networking platform where users can create a personalised blog about anything they desire, be it "cats in funny hats", origami, or their most personal feelings. Most blogs are involved in the production or sharing of a wide variety of textual and visual digital media, ranging from animated images, YouTube videos or still images. Like Twitter, Tumblr has the ability to sort content by hashtags. It also allows users to 'follow' others and be 'followed', though unlike Twitter or Facebook these connections are not made publicly visible, nor are they necessarily reciprocal: you can follow someone but this doesn't mean they must follow you.

It is becoming clear that Tumblr is distinct from its social networking counterparts in a number of ways. Recent quantitative data indicates that the most common demographic on Tumblr is young people aged 18 to 24. While Tumblr is host to over 140 million individual blogs, many of these are social groupings of like-minded users, who gather to discuss their cultural distinctions, flirt, date, give advice or express their identities.

Recent media reports have depicted Tumblr as no more than a 'dark space' in which young people can access dangerous information on body image or self-harm. However, a delicate balance between risk and opportunity is required by users, with recent research showing that the relationship between risk, harm and safety is complex.

Risk does not equate to harm, and users require some exposure to risk in order to develop the digital literacies required to engage online safely. To leverage the potential benefits of social media for vulnerable young people's wellbeing, we now need a more finely grained understanding of how young people are engaging online, and what meanings they attach to their online practices, particularly around intimacy and community.

Indeed, studies have shown there are distinct benefits for young people engaging with social networking sites. Rather than a moral panic around the capacity of new social media platforms to surface problematic issues, what is needed are ways to promote the positive potential of new forms of social connectivity that link with vulnerable young people's networks of healthy support that can help them find their place in the world. The Young and Well Cooperative Research Centre is at the forefront of this shift, in enabling researchers such as ourselves to explore the role of technologies in improving young people's mental health and wellbeing.

Sociality and intimacy are being practised in novel ways by young people on Tumblr. Young people on Tumblr are engaged in experiencing deep and enduring forms of intimacy online, in spaces that are seen as 'safe' from the potential judgement of their 'real life' friends or family.

Sites like Tumblr fulfil a crucial role in helping young people find and receive the peer connections they need at this age. New forms of intimacy are emerging online, and our established conceptions of intimacy need to transform in order to take account of these shifts. While sexual relationships are a common focus in the empirical literature, this research shows that there are vast numbers of supportive communities that welcome people with marginalised or alternative identities on Tumblr, giving isolated or at-risk young people a sense of belonging through the opportunity to network and share their experiences with others like themselves.

Earlier this year, Tumblr was purchased by Yahoo! for approximately $1.1 billion. It is unclear what effect this move will have on the direction Tumblr takes, or how this will impact on these communities that use it. However, that these intimate community spaces exist at all reflects the social capital limitations that young people encounter in their offline lives, and highlights the notion, regardless of the generation that they were born into, young people will seek places to make their own.