What is going on in Brazil? The World Cup and its malcontents

The following piece was originally published on The Conversation (opens in a new window) website.

In the past fortnight, there have been demonstrations in Brazil of a magnitude not seen since the movement for direct elections in the mid-1980s, and for former president Fernando Collor de Mello’s impeachment in 1990.

What started with smaller demonstrations São Paulo and Rio de Janeiro has grown to hundreds of thousands of protesting people in other capital cities and towns in the country, and among the global diaspora. The largest demonstration took place on June 17. Then, thousands of marched on to the National Congress in Brasília and legislative assemblies throughout the country.

On June 18 there were protests in Sydney, Melbourne, Brisbane and the Gold Coast: cities where the Brazilian community is concentrated. But what is going on? 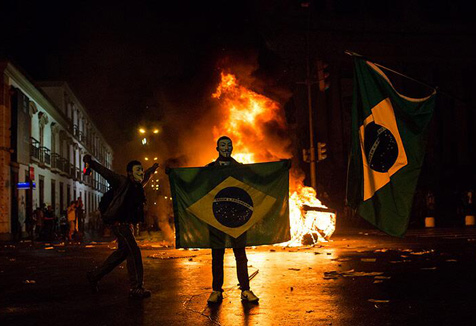 The ostensible cause was the rise in the price of public transport from R$3.00 to R$3.20 in São Paulo, although this should not spark so much anger in the population. However, the Free Fare Movement (which is organising these rallies) has tapped into the underlying anger Brazilians have been feeling for the past years.

The population has long seen politicians being convicted of corruption but allowed to walk free because they approve new laws with loopholes specifically designed for them. On June 26, politicians will vote on PEC 37, an amendment to the Brazilian constitution which will make it impossible for the Department of Public Prosecution to investigate corruption and human rights crimes committed by public officials.

In addition, large sums of money have disappeared in the black hole of the World Cup preparations and developers' pockets. Tickets for the World Cup are said to be so expensive that only the elite and foreigners will be able to afford them. Meanwhile, the quality of public hospitals and schools is so poor that only the disenfranchised patronise them.

Finally, public transport has deteriorated. The poor, who live in the periphery of large cities, usually stand in cramped buses for around two hours to get to work. For the middle classes, streets are so choked with cars that they also spend a long time getting to work. Similar to Australia, the mining boom has meant that the cost of living is very high for all but the elites. It is now cheaper for upper middle-class Brazilians to go on shopping trips to London and New York where they shop for everything from baby clothes and prams to iPads and mobile phones.

The protests were met with violent backlash by the police, and this reminded many of the police brutality during the Brazilian military dictatorship of 1964 to 1985. Then, many activists were tortured and died in prison.

Police have thrown tear gas and shot rubber bullets at the population on the streets. Many were rounded up, beaten to the ground and taken into the police stations for carrying vinegar-drenched rags used as a relief from tear gas.

Journalists from Folha de São Paulo, one of the largest newspapers in Brazil, tell of how a police car drove by slowly and threw tear gas at them when they were preparing their equipment in a carpark away from the demonstration. In separate incidents, two journalists from the same newspaper were shot in the eye with rubber bullets. One of them, a cameraman, lost most of his vision in one eye.

The callousness of the police came as a shock to the middle classes who were used to such behaviour directed exclusively to the poor in favelas. Much of the middle classes – who experience high levels of crime in everyday life – feel that in many case police oppression is justified.

However, crime and violence is experienced by all in Brazil. This is a consequence of the fact that Brazil has the 17th most unequal wealth distribution in the world, with a Gini index of 51.9 – down from 55.3 in 2001, despite recent improvements.

Rather than instilling fear and making people retreat, the police brutality emboldened demonstrators and resulted in tens of thousands in the streets (65,000 protested in São Paulo, while there were 100,000 in Rio de Janeiro). Social networking sites went in overdrive and coordinated the events throughout Brazil and other countries in the world, where Brazilians migrated to escape crime, violence and seek a better life.

Politicians, who at first called demonstrators “vandals”, have since backpedalled and reined in the police. On Facebook, many have compared the movement to the recent events in Turkey, the Occupy Movement, the Indignados of Spain, and the Arab Spring. There is disenchantment with the political system: the large majority of the population feel that none of the political parties represent them. For them, politicians work for themselves.

What does that mean for the country which will hold the World Cup in 2014 the Olympics in 2016? How will this movement play out in the long run? Political analysts and politicians in Brazil are perplexed with the speed and strength with which the movement grew. Dilma Rouseff, the president who fought and was tortured by the dictatorship in her youth, had little to add, saying "peaceful demonstrations by the youth are legitimate."

Like many movements throughout the world, globalisation had an important role to play in its creation and growth. As more Brazilians become affluent, they are able to travel to the developed world and experience high quality of life elsewhere. The movement’s organisation also took place through social networks, which bypassed the more conservative media such as TV Globo.

As with similar movements elsewhere, it does not have a clear leadership and is comprised of people who have disparate demands: from better hospitals, schools and transport to a less corrupt and fairer society.

Dr Cristina Rocha teaches at the School of Humanities and Languages and is a member of the Religion and Society Research Centre.She is currently researching Brazilian migrants in Australia and Australian followers of the Brazilian Spiritist healer John of God (João de Deus).