The great parenting debate: Is it neglectful to let children walk to school alone? 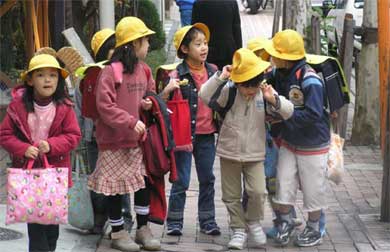 If you let your child walk to school alone, are you being negligent? If you refuse to let your child leave the house unaccompanied, are you denying them important life lessons?

Professor Karen Malone, from the University of Western Sydney's School of Education, is also Chair and Founder of the Child Friendly Asia-Pacific network and a member of the UNICEF International Research Advisory Board for Child Friendly Cities.

She says Australian parents are caught between the two competing societal expectations – to constantly supervise their children; and to provide enough freedom so that they can grow into independent, self-reliant, confident adults.

"Gone are the days when Australian children could play alone in their neighbourhoods – building cubbies, climbing trees, playing cricket, or searching for tadpoles in the local creek," says Professor Malone.

"Today, parents are being considered neglectful if they allow their children to walk to school alone, let alone be outside until dinner time – and at the same time they are being criticized if they appear to be 'bubble wrapping' their children."

Professor Malone says, rather than questioning the decisions and motivations of parents, communities should be working together to give families more support, and to give children more freedom to have active, outdoor lives.

"Japanese parents are equally concerned about 'stranger danger' and the likelihood of child abductions – the difference is that, within their neighbourhoods, concrete strategies have been developed to make the safety of children a priority for the entire community.

"This may include parent safety brigades that patrol the streets around schools; shopkeepers who are signed up as members of neighbourhood watch programs; and GPS devices that hang around a child's neck and connect them instantly to a help call centre."

Professor Malone says the ability for children to be unsupervised by adults in their own neighourhood is an indicator of a civil, safe and healthy society. Without it, we risk undermining children's quality of life.

"It is up to the community to help children reclaim the streets and local parks, and to let parents know that they are being supported."