Political favours and the rights of TV sport audiences 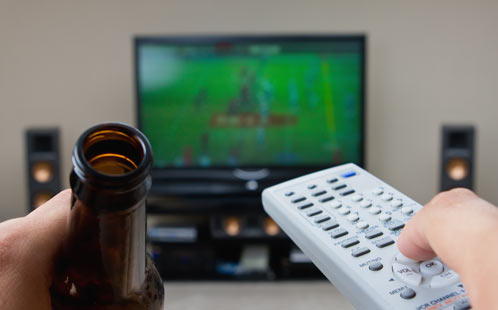 As the dust settles after a decisive change of government, it is time for the main support players to call in their favours(opens in a new window). Among the cheerleaders for a Coalition government, none was more vocal than the Murdoch media, which subjected a wounded Labor government to a barrage of obstreperous tabloid front pages, relentless broadsheet criticism, and a constant stream of syndicated hostility across its many platforms.

News Corp Australia was not shy about being led from the top in this campaign. Chairman Rupert Murdoch took to Twitter (with a characteristic apostrophic error) in June to declare "Australian public now totally disgusted with Labor Party wrecking country with it’s [sic] sordid intrigues. Now for a quick election."

With mission accomplished, and after Murdoch’s Lowy Institute pep talk(opens in a new window) on “Australian values” and “the key drivers of prosperity: trade, technology and free market” last month, attention has turned to the juicy concessions that might be extracted from a sympathetic government.

Australians need look no further than their multiplying television, computer, tablet and mobile screens. With an Ashes series in full swing and Australian Open tennis around the corner, many will engage in the languid summer pursuit of television sport viewing.

As I have previously written(opens in a new window), Australians live in a country with the world’s strongest anti-siphoning provisions, which prevent “events of national importance and cultural significance” – in Australia that means sport events like football grand finals, the Ashes, Melbourne Cup, Olympics and Wimbledon – from being exclusively shown on pay-TV.

Watching significant national sporting events on television free of charge can be regarded as a right of cultural citizenship. This means that no-one can be involuntarily excluded from participating in popular national rituals on the grounds that they cannot afford the price of entry – in this case, a pay-TV subscription.

But this sport-loving television audience is a great economic prize. In his 1996 pre-tweeting days, Rupert Murdoch famously told shareholders that “sport absolutely overpowers film and everything else in the entertainment genre”, creating a need to, in Rupert Murdoch's words, "use sports as a battering ram and a lead offering in all our pay television operations."

Live sport is the most successful attractor of pay-TV subscribers, and doubly so when it is exclusive – as is the case with soccer and Ashes cricket in the UK, and rugby union in New Zealand.

In my current research on sport and cultural citizenship, interviewees repeatedly confirm that sport was crucial in their decision to subscribe to Foxtel. However, from the point of view of pay-TV bosses, there are just not enough paying customers, with subscribing households remaining stubbornly around the 30% level(opens in a new window). Viewers clearly need more “encouragement” than the usual letterbox special offers. Migrating favourite sports events from free-to-air to pay-TV would certainly be a potent push factor.

So, with some solid political capital in the bank, the main Australian pay-TV players are lobbying in earnest to reduce the scope of the current list of protected free-to-air sport events. Under the previous Labor government, following the 2010 Sport on Television Review, limits to free-to-air TV “hoarding” the rights to sports that they didn’t broadcast were introduced, along with sport event tiers with different levels of protection.

But despite its submissions to the inquiry, the pay-TV industry did not achieve a major reduction in the size of the anti-siphoning list or de-throne “old” television in the media sport marketplace. The most active organisations currently agitating for change – Foxtel (co-owned by Telstra and News Corp Australia) and Fox Sports (wholly owned by News Corp Australia) – are reportedly targeting the delisting of overseas sport events.

These events include US Open tennis and US Masters golf, the Ashes in England, and overseas matches involving the national teams of the men’s football codes, the Socceroos, Wallabies and Kangaroos. Splitting the bidding processes for free-to-air and pay-TV rights to remove the dominant “gatekeeper” market role of the networks is also being urged.

The pay-TV companies argue that these moves would be popular with sports bodies by generating more TV income, and would also recognise the coming digital post-broadcast environment in which sport can be accessed on all manner of screens.

Sports, though, are not always the best guardians of national cultural citizenship when tempted by media gold. For example, much is made of the financial enrichment of England cricket after Sky Sports acquired its exclusive live rights from 2006 onwards. But rather less is heard of the substantial falls in viewership(opens in a new window) – the 2009 Ashes series peak of two million viewers was barely a quarter of the 2005 viewership on Channel Four. It fell further to 1.3 million in the 2013 series.

One researcher(opens in a new window) explains the universal fall in viewership when a sport moves to pay-TV by saying "People who are older or poorer or who live in rural areas are substantially less likely to be able to watch it, regardless of their interest in or commitment to that sport. But, even in cities, significantly fewer people watch sport on pay-TV than watch it on free-to-air channels."

In a recently co-edited book on sport, television and cultural citizenship with contributions from North and South America, Europe, Africa, Asia, Australasia and the Middle East, considerable regional/national variation was evident. Argentina recently “re-nationalised” soccer on television; there are inexpensive “show houses” for watching soccer in Africa; while Singapore charges premium prices for TV sport.

Last week, it was announced that the famous “Hockey Night in Canada” is secure on public broadcaster CBC for another four years, but that broadcast and digital rights of the National Hockey League are now dominated by Rogers Communications after a CAN$5.2 billion, 12-year deal.

In Australia, key constituents of the national cultural estate, such as the Ashes, are secure for the time being. But the heat is on the new government to show its gratitude by doctoring the TV sport pitch to favour its fair-weather friends.