How citizen scientists discovered a giant cluster of galaxies 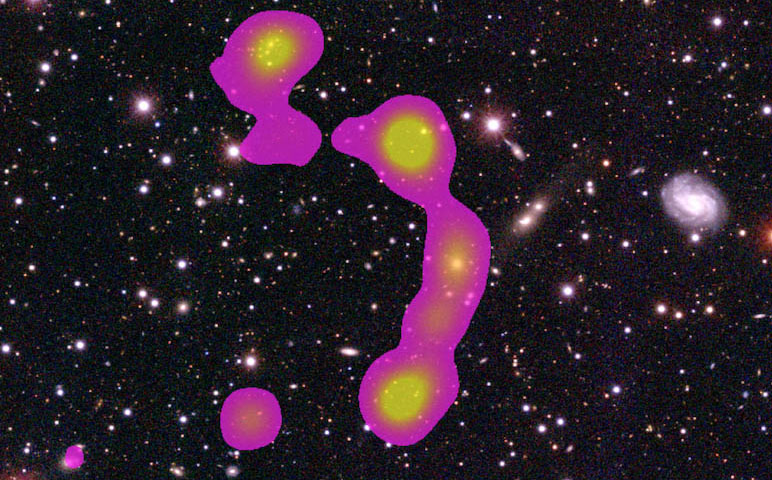 The following piece, by Professor Ray Norris, from the School of Computing, Engineering and Mathematics, was first published by The Conversation.

It used to be that you had to have years of training before you could participate in cutting-edge science.

But that has changed, with the power of the internet enabling thousands of ordinary people to contribute to one of humanity's most exciting endeavours from the comfort of their homes.

It was announced in May that a cluster of galaxies millions of light years away was discovered by a team of citizen scientists clicking on images on their computers at home.

Citizen Science first became prominent in 2006 with the launch of Stardust@home by the University of California-Berkeley, quickly followed in 2007 by Galaxy Zoo, which aimed to classify galaxies from optical images.

Now, many such citizen science projects span all fields of science from astronomy to biology.

The idea is simple: the average human brain is far superior to our most powerful computers when it comes to problems like image recognition.

So citizen science projects combine the brainpower of thousands of ordinary people to solve some of science's most challenging problems.

What do the citizen scientists get out of it? In most cases, the knowledge that they are helping to expand the frontiers of human knowledge. And perhaps the chance of making a truly great discovery.

The Evolutionary Map of the Universe (EMU) project will survey the radio sky using CSIRO's new A$165-million ASKAP telescope being built in Western Australia, to understand how galaxies form and evolve.

We expect EMU to discover about 70-million galaxies from their radio emission, compared to the 2.5-million so far known.

But we have a problem: to get the best science, we need to cross-match these radio sources with galaxies spotted by infrared and optical telescopes, and no research team has enough members to match 70-million objects by eye.

About half of EMU's radio sources are galaxies like our own Milky Way, with radio emission resulting from the debris of star formation, so that the radio source is easily matched to the optical galaxy. 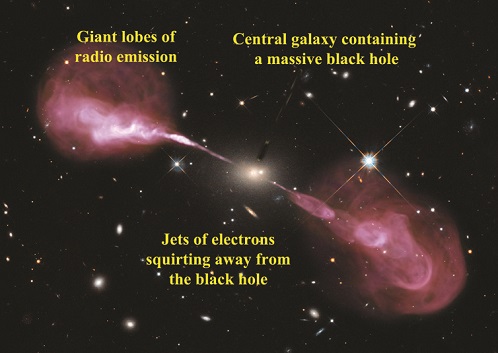 EMU will see them as three blobs of emission in a line. But how can you distinguish one of these triple monsters from a line of three single galaxies like the Milky Way? It's hard.

Clever automated algorithms, such as neural networks, are still in their infancy, and not yet up to the task. But the human brain is really good at this.

In 2010 I visited Chris Lintott at the University of Oxford. Chris was one of the founders of Galaxy Zoo, and I wanted to know if we could build something like Galaxy Zoo to solve EMU's problem.

And thus Radio Galaxy Zoo (RGZ) was born, with two young scientists, Julie Banfield from ANU, and Ivy Wong from the University of Western Australia, taking over responsibility for leading it.

After two years of designing the interface, and trying out prototypes, RGZ was launched in December 2013. Since then, RGZ has been enormously successful, with about 10,000 people matching up the sources, resulting in some 1.6 million cross-matches.

Mainstream science moves forward on two different paths. Perhaps the better known is the painstaking analysis needed to test a hypothesis or understand how something works, like searching for the Higgs boson with the Large Hadron Collider.

This way solves the "known unknowns" of science. The other path is when scientists unexpectedly stumble across something they weren't looking for and weren't expecting – an "unknown unknown", such as Dark Energy.

Citizen Science is the same. Radio Galaxy Zoo asks people to match up images taken with radio telescopes with those taken with infrared telescopes. It's hard work, but very important if we are to make sense of our universe.

Occasionally, they stumble across major discoveries.

Two Russian citizen scientists, Ivan Terentev and Tim Matorny, were cross-matching the radio and infrared sources in RGZ, when they noticed something odd about one of the radio sources.

"They found something that none of us had even thought would be possible," Dr Banfield said.

What the Russians had found was just one of a line of radio blobs that delineate a C-shaped "wide angle tail galaxy". These rare objects are caused by electron jets ejected from a massive black hole, but in this case they are blown sideways by their flight through the intergalactic gas, making them bend into a C shape.

The characteristic bent tails are a sure sign that there is intergalactic gas, signifying a cluster of galaxies, the largest known objects in the universe.

The wide-angle tail galaxy discovered by Terentev and Matorny is one of the largest known, and its host cluster is now known as the Matorny-Terentev cluster.

This cluster, more than a billion light years away, contains at least 40 galaxies, marking an intersection of the sheets and filaments of the cosmic web that make up our universe.

Despite their cosmic importance, clusters are notoriously hard to find, and wide angle tail galaxies may turn out to be one of the best ways of finding them.

Nevertheless, finding the wide angle tails themselves amongst the millions of radio sources is like finding a needle in a haystack.

The discovery was detailed in a paper published this month in the Monthly Notices of the Royal Astronomical Society.

Clusters are poorly understood, but are key to understanding how our universe is put together. This discovery takes us a step closer to figuring it out.

So what's next? Obviously, RGZ will continue, and who knows what other discoveries may emerge. But not even RGZ is fast enough to classify all of EMU's 70-million galaxies, and our machine learning algorithms are too dumb to do it well.

So, instead, we will harness the power of RGZ to train our machine-learning algorithms. Future RGZ citizen scientists will not just be classifying galaxies, they will be teaching the next-generation algorithms how to do it.