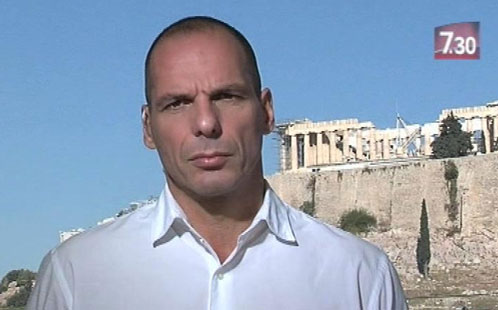 The following opinion piece by Associate Professor Partha Gangopadhyay, from the UWS School of Business, was first published on The Conversation website

Decades ago, before Yanis Varoufakis became the rock-star finance minister of Greece, he and I developed some game-theoretic models of macroeconomics. The gist of the work was this: for monetary authorities eager to preserve their autonomy, an unequivocally good reputation for relations with the government may not be desirable. Our work illustrated why a central bank may prefer to be shrouded in ambiguity rather than be known as a strong defender of its monetary policy against government challenges, or otherwise. Why? Because central banks are also involved in contests with other self-seeking interest groups like banks and other financial entities, and the bank's overall reputation is predicated on these simultaneous contests.

In our youthful exuberance, we sold the model with a sexist parable for delivering a punchline: "Suppose you are an avatar like Adonis and you have two beautiful divas, Aphrodite and Persephone, as your girlfriends who are blissfully unaware of each other. If you don't want to come under the wrath of either of them, what should be your rational strategy? Should you reveal your hand? Should you guard it and hide it?"

The value of ambiguity arises and evolves from the very nature of multiple contests. As the new finance minister of Greece, Yanis Varoufakis faces a new batch of contests. The common perception in Greece today is that the government was elected with the main mandate to write off most of the country's €310 billion in sovereign debt. This is the first contest Yanis is involved in: supporters of the political constituency of Syriza in Greece will put relentless pressure on him to write off the debt.

This contest is more like the classic courtship between Aphrodite and Adonis: Aphrodite (Greek voters) falls in love with young Adonis (nouveau politician Yanis), a fresh political force in Greece, since she is wounded by Eros' arrow (i.e. crumbling sovereign debts). After the election, Aphrodite now entrusts Yanis with Persephone, the eurozone governments who are the creditors of Greece's €310 billion sovereign debt. This opens up the second, but interlinked, contest between Yanis and Persephone.

In the first contest, Aphrodite seeks a "haircut" from Yanis – close to the aggressive one Yanis is donning at the moment. In other words, Greek voters want the "haircut" to write off €310 billion of sovereign debt. Aphrodite knows that Persephone possibly wants Yanis to respect the debt obligations that eurozone tax-payers have lent to Greece. Yanis travelled to Germany, France and the UK last week to meet his new consort, Persephone, who immediately demanded a debt-swap. Facing Persephone on her own territory, Yanis now knows the fundamental conflict of his political life: Aphrodite vis-a-vis Persephone, or debt-haircut vis-a-vis debt-swap.

If Yanis goes for Aphrodite, the wild boar (the eurozone governments, sent by Artemis - the EU financial interests), will kill his political career. His political career will die in Aphrodite's loving arms in Greece – a perfect theme for an opera like Tosca in the Puccini style, though I am not sure who will play the role of Baron Scarpia – maybe George Osborne. If Yanis goes for Persephone, the lynch mob will wait for him at Athens airport.

So the new era of the eurozone is riddled with at least two contests for Yanis - one is between Yanis and Aphrodite and the other involves Yanis and Persephone. Little over a week ago Greek premier Alexis Tsipras, together with Yanis, announced with due boldness "there will be no unilateral action on sovereign debt."

Once outside Greece, Yanis announced that the debt haircut was not feasible – so one should expect a debt swap. Was it just a simple act of Yanis serenading Persephone while outside Greece? Will it be a different tune when Yanis serenades his political constituency in Greece by going for the debt haircut yet again? Here, I reckon Yanis, being an astute game theorist, will fall back on our old model of strategic ambiguity to simultaneously bluff and, thereby, manage Aphrodite and Persephone. If Yanis can do this, Syriza will enjoy a gala time in the office. The story is simple: Yanis will split the €310 billion debt into two categories: the first one will go to the basket earmarked for debt swap, with the debt converted into performance bonds linked to the nominal growth of Greek GDP. The second component of debt will be converted into a perpetual bond. Greece will need to pay interest on this second component, but no repayments of the principal. This clever ploy can appease Aphrodite and Persephone simultaneously - Yanis' key to resolve this uncertainty for the political survival of the new government.

One uncertainty is about the split – should it be a 50-50 split? This question will be answered soon from multi-party negotiations. This is not the fundamental uncertainty. The fundamental uncertainty is the nominal growth of Greek GDP. Note that both baskets will appease Aphrodite and Persephone, yet Yanis can choose who is the "real" winner between them. With the second basket, Aphrodite (his voters) is very happy since the debt will not be repaid ever, which is akin to some sort of debt haircut. The first basket is the bitter pill for Aphrodite since the debt is replaced by performance bonds. Persephone should be ecstatic as this will lift the productivity and growth in Greece and business confidence will return. However, the key to understanding the uncertainty is nominal growth and not real growth. As long as Greece enjoys real growth but no, or low, nominal GDP growth – Yanis will pay nothing to eurozone creditors. In other words, Greece will pay nothing for the performance-linked bonds if deflation continues in Greece.

Hence, Yanis' economic strategy will be to ask the (Central) Bank of Greece to control inflation, keeping it below real economic growth, which will stop Aphrodite from clamouring for his head but can deliver close to nothing to Persephone. At the end of the day, Yanis will have some control over the rate of inflation, rather dis-inflation, vis-a-vis the growth rate of real GDP. The uncertainty evolves from the deflation, or dis-inflation, rate. In the second basket of reformulated debt, for the perpetual bond, Yanis will have absolutely no control.

So the strategic ambiguity will be Yanis's evolving preference for dis-inflation vis-a-vis growth, which will in turn change over time depending on the interpretation of his monetary policy by his two consorts Aphrodite and Persephone. This ambiguity will give Yanis leeway for undertaking long-term changes in the Greek economy. These long-terms changes will mainly involve boosting investment in infrastructure and curbing tax evasion in Greece. There are two critical issues lurking in Greece: first, in the short run, what will happen to austerity measures if the rate of growth of GDP falls below 2%? The Greek government will have to pump money to avoid recession. The additional money could create high inflation with supply-side problems, increasing Greece's debt repayments under the performance bonds. This will evict Syriza from the political arena.

In the long run, Yanis is holding his breath on arresting the rising trend of tax evasion by Greek oligarchs. This will be a tough wrestle, with Yanis shirt-fronting the most powerful Greek lobby of bare-chested oligarchs. Nobody yet knows whether Yanis will be able to extract any tax revenues from these Greek oligarchs and, must I highlight yet again, these revenues are the lifeblood for the reconstruction of the Greek economy. This wrestle will pose a major law and order issue in Greece, which is beyond the realm of economics only.

I am sure that Yanis will receive great support from Aphrodite in the battle against oligarchs, but what of Persephone? Will she show courage and lend support to Yanis in his battle against Greek oligarchs? Right now I have grave doubts. This is the major source of crisis both for Greece and the eurozone: how to have Greek oligarchs bound, delivering much-needed resources to the Greek economy. This will possibly lead to the next Greek tragedy, "Yanis Bound". Much like Prometheus, who defied the gods to give fire to humanity and was subsequently subjected to perpetual punishment, Yanis will likely be judged harshly if his gambit is not favourably received.