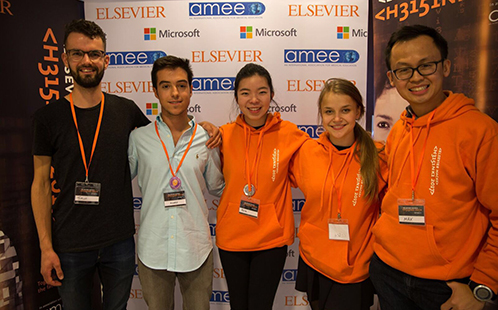 Alice Leung (centre) and her team at Elsevier Hacks 2017

A Western Sydney University medical student has worked to develop the prototype for an educational app, which has been announced as the overall winner of Elsevier Hacks 2017.

Elsevier Hacks is an app-building conference which brings medical students from around the world together with coders and designers.

Alice Leung, a Western Sydney University Bachelor of Medicine/ Bachelor of Surgery student, travelled to Finland to participate in the conference.

One of only 16 students selected from more than 1500 applicants – Alice initially pitched the idea to develop a smart phone app that allowed medical students to learn their course material anytime, anywhere.

After arriving in Finland, Alice was paired with two developers and two other medical students from the Netherlands and Spain. The team pooled their ideas and skills to develop a functional prototype for a new app, 'PatientX'. A prototype of PatientX

The app is effectively a 'chat bot' – like Siri – which processes and responds to verbal or written instructions.

"The idea behind 'PatientX' is that it allows medical students to practice their clinical reasoning and decision making," says Alice.

"Students can speak into the app the symptoms that they encounter with a patient case study. The app may pose further questions or provide feedback, to which the students can make further investigations or respond, and then safely be able to go through the process of diagnosis and treatment."

As the winner of Elsevier Hacks 2017, Alice's team is aiming to continue working on PatientX, and take it to the stage of development and commercialisation.

"Our aim is for universities all over the world to be able to download PatientX, load into the app their own problems and case studies, and utilise the technology that we have developed to educate medical students," says Alice.