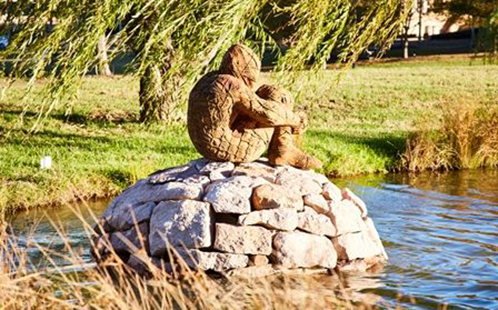 Western Sydney University’s Acquisitive Sculpture Award and Exhibition has come to a close with the announcement of the Landcom People’s Choice award.

Artist Michael Purdy from the South Coast, won People’s Choice for his sculpture titled Gimme Shelter and has won $5,000 from sponsor Landcom. He was presented with the award by Landcom Head of Projects Matt Beggs in a ceremony at Campbelltown Arts Centre.

Western Sydney University’s Art Curator Monica McMahon said the exhibition this year has attracted a wide section of the community who voted for the People’s Choice.

“We have had visitors from local walking groups, disability groups, day care centres and primary schools, as well as staff and students and local residents from the region but especially from the estate, on the edge of our campus, Macarthur Heights,” says Ms McMahon.

Michael Purdy said he was thrilled to receive the Landcom People’s Choice Award in a year when there were so many excellent entries.

“Figurative works in general tend to connect well with the public, but l think in this case, the positioning of the wooden man on his tiny barren island was a large factor in the success of the sculpture and its resulting popularity,” Mr Purdy said. Matt Beggs said Landcom had been a proud sponsor of the awards since 2006, and it was an important way to strengthen ties with the University and give something back to the community.

“Landcom has recognised the importance of public art by including works in our various housing developments to make public spaces more engaging, inviting and vibrant,” says Mr Beggs.

“Some of the previous award-winning sculptures from this event are located in Landcom developments, and Landcom is proud to continue to support artists with the $5,000 People’s Choice Award.”

The 9th biennial Western Sydney Acquisitive Sculpture Award and Exhibition will be held in 2020.