Winner of the 2014 UWS Sculpture Award: Greer Taylor for her sculpture reprieve

"In a forest a tree might fall, but sometimes, if it is not too heavy for its neighbour, or falls slowly enough, it is caught and is able to live on, saved from destruction by its position in the forest. Sometimes this reprieve will enable the tree to regain a strong connection to the earth allowing it to live on, even if its support crumbles.

"This dynamic creates new spaces within a forest, often resulting in the most sculptural of trees. It is though, a dynamic that is only really ‘allowed’ to happen in a wild forest… "

Greer Taylor has worked in many fields of the visual arts: fashion, textile art, graphic design, all providing resource for her current fine art practice.

Taylor shows in annual solo exhibitions while regularly contributing to group exhibitions. She is actively involved in promoting the arts in the Illawarra as a founding member of Illawarra Association for the Visual Arts.

She is deeply passionate about the natural environment.

Represented in collections in: 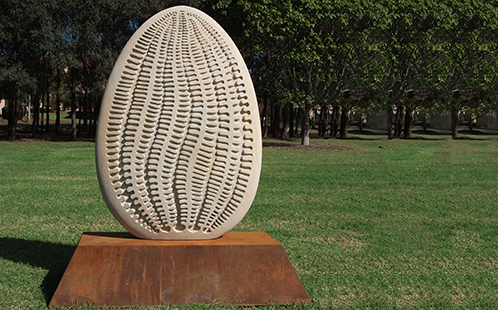 Winner of the UrbanGrowth Acquisitive Sculpture Award: Michael Purdy for his sculpture Oneness

"This sculpture is one of series of works in which I am attempting to create non-religious sacred objects. Based in the principles of Hatha yoga where opposites paradoxically combine to create a oneness, the balancing of positive and negative space in the design aims at achieving a soothing simplicity, despite the busy complexity of its individual elements. Originally conceived while camping in Murramarang National Park, its conception is testament to the saying…'relaxed is who we are… Stressed is who we think we should be'"

Michael Purdy studied landscape architecture at UNSW and learnt to work with stone while creating sandstone based landscapes around Sydney. Though he has lived on the South Coast of NSW for ten years, his works are best known by regular visitors to Bondi’s Sculpture by the Sea where he has exhibited seven times, winning four awards including People’s Choice in 2005. Commissions include Frazer Motorcyles at Strathfield, Argyle Hotel at The Rocks and the Sydney Seafood School at the Sydney fish markets.

2014 Sculpture on the Edge, Bermagui

2013 Sculpture on the Edge, Bermagui

2012 Sculpture on the Edge, Bermagui

2011 Arts in the Valley, Kangaroo Valley

2013 Sculpture on the Edge, Emerging Artists

2011 Arts in the Valley, Highly Commended 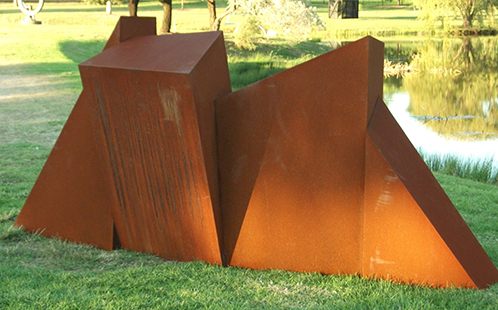 "The work of Sydney based sculptor, Morgan Shimeld is primarily concerned with the aesthetic and theoretical concepts of the interaction of internal and external spaces. Shimeld’s work is characterised by attention to structure and form, with strong and grounded monolithic shapes, using perspective and precisely angled planes. These geometric elements act to draw the viewer into the work and opposing sides will often have quite a different sense of balance and perspective."

More details about the 2014 UWS Sculpture Awards and Exhibition, including a full list of the finalists.

Opinion: What does the Optus data breach mean for you and how can you protect yourself? A step-by-step guide

Optus, Australia’s second largest telecommunications company, announced on September 22 that identifying details of up to 9.8 million customers were stolen from their customer database. The theme of this year’s Dementia Awareness Month is Know Dementia, Know Alzheimer’s placing an emphasis on diagnosis, the warning signs and the continued effect of COVID-19 on the global dementia community. A new international study including researchers from Western Sydney University reveals termites play a critical role in the world’s ecosystems, particularly in the tropics, and they are expected to become increasingly important as temperatures rise globally.