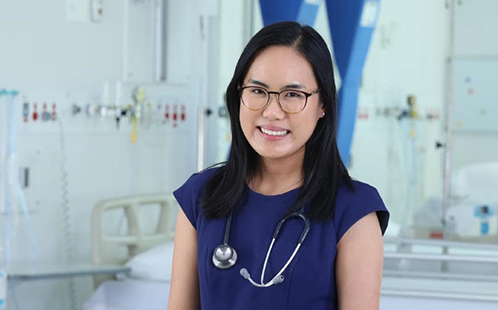 A part of the NSW Prevocational Training Awards through the Health Education and Training Institute (HETI), Dr Nguyen’s award acknowledges her drive to improve education and training and support the welfare of her peers at Liverpool Hospital.

With a passion to pursue a career in humanitarian aid, she made the choice to study medicine at Western Sydney University and strongly aligned with the ethos – empowerment of students to enrich the community.

Dr Nguyen gained entrance with multiple scholarships, including the Vice Chancellor’s Leadership Scholarship, and participated in a number of leadership programs during her studies, an opportunity which she says ‘sets Western graduates apart’.

Dr Nguyen was nominated for the award by her peers in recognition of her efforts to improve the workplace culture for junior doctors. She has been instrumental in the implementation of a program designed to support new doctors commencing work at Liverpool, one of the busiest hospitals in the state.

Recognising a gap in practical teaching for prevocational doctors, Dr Nguyen introduced a JMO-led teaching program. She is additionally a Conjoint Associate Lecturer for medical students following in her footsteps at Western Sydney University, and also at the University of NSW.

"I was on the wards about to chart some fluids for a patient when I received a phone call from HETI to say that I’d been nominated for the award. I was so touched to have been recognised with a nomination that I barely heard them going on to say that I’d won!" Says Dr Nguyen.

Dr Nguyen will represent NSW at the Confederation of Postgraduate Medical Education Councils (CPMEC) Australia & New Zealand Junior Doctor of the Year Award to be announced at the ANZ Prevocational Education Forum in November.