When reaching out for help, is being strong 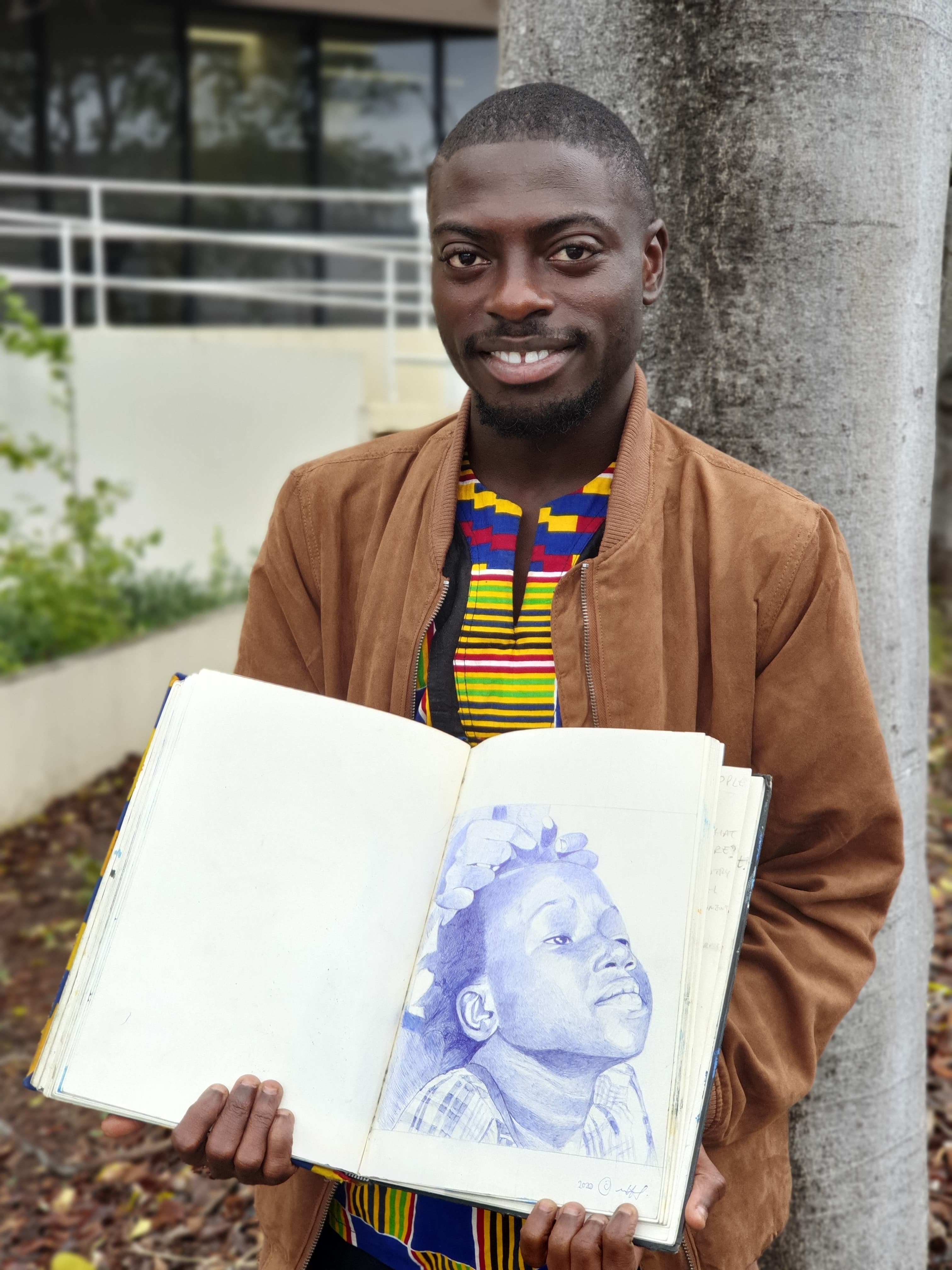 When Emmanuel Asante arrived in Australia in 2015, he thought he was moving to paradise. Having struggled through lack of opportunities, access to food, and corruption in his home country of Ghana, he arrived with hope of a better life.  But Emmanuel experienced a reality he hadn’t expected, one fuelled by racism and difference. It led him to experience extreme depression and anxiety, and it began to claim his will to live.

Emmanuel’s father had moved from Ghana to Campbelltown in 2008, to support his family financially. When the rest of the family joined him, Emmanuel was 19-years-old. He was about to complete school in Ghana but was advised to begin his senior years again, to allow him to be graded fairly. He was classed with Year 11 students much younger than himself and his age difference became an unwelcome discussion point — creating a barrier for him to fit in and make friends.

Things improved when his art teachers discovered his passion for art and helped to harness his skills. He also made a friend who shared his passion. But in 2016 his family moved to Fairfield and Emmanuel made the decision to continue his schooling at Eagle Vale High School. He was aware that high school was important socially as well as academically, and he didn’t want to start over again. But his decision caused a strain on his relationship with his parents and was offered no support.  Emmanuel needed to manage the extra commute on his own, where he’d also walk a large distance to avoid the discrimination he had faced on the bus.

Emmanuel’s stress began to build up. As well as the extra pressure of travel and the complexity of senior level work, Emmanuel’s one friend graduated and his relationship with a girlfriend ended. Not able to cope, Emmanuel repeated another year of school, increasing the concerns of his age even more.

He knew that he was changing as a person. His moods were dark and he avoided looking at people. Name calling on the sports field also became too much and he withdrew from sport to avoid the problem. Emmanuel would go home and self-harm to relieve the pain he felt. He lost his appetite and ability to sleep easily. Emmanuel felt afraid to ask for help because, in his culture, men asking for help is seen as weak and mental illness as a bad omen. His family also believed it would go on his record, so advised him to keep quiet.

Emmanuel began thinking about ending his life. In desperation, he called his friend in Ghana and believes that that conversation saved his life. After saying how hard life felt, his friend replied, “I know you are stronger, you have been through worse. You can‘t leave me.”

The next day, his teacher noticed the scar on his arm and she took him to the school counsellor, who referred him to a mental health service. Emmanuel was diagnosed with severe anxiety and depression. From this diagnosis, Emmanuel was linked to Headspace and Settlement Service International (SSI) programs, such as Ability Links, for support.

Emmanuel is grateful to all of the teachers and services that guided him through his recovery and shaped who he is now. He admits that he didn’t have a smooth run with psychologists, but when he found one that was a fit, he thinks he saved his life. He designed a therapy plan that included art and running.

Emmanuel says that running helped to shift his feelings, ‘I didn’t think, and when I got home, my muscles ached and I slept.’ While art allowed him to channel the energy into something creative, ‘My teacher told me to stop taking my pain out on my body and express it through art.’

His therapist also suggested keeping an elastic around his wrist, to focus on in challenging moments. Emmanuel says that he often called Lifeline for support and it allowed him to feel safe.

Emmanuel still maintains his mental health through art and running, or going to the gym. He also listens to motivational talks on YouTube and has discovered that sharing his story, and not bottling up his feelings, was helpful.

Looking back, Emmanuel says he is proud of not giving up on himself—even when he didn’t feel like life was worth living. He is also proud of where his art has taken him, and making his mum proud.

Having been awarded Arts Young Achievement Award in Fairfield in 2019 and Young Achiever for the African Australian Awards, he is now a respected artist. Using art to change people’s perceptions, Emmanuel paints murals, teaches art workshops, and has had his works exhibited. He has a clear plan for the life he wants to have, including being an advocate for anti-racism in schools and mental health awareness in diverse communities.

The advice he would give to other men is that, ‘It’s okay to not be okay and it’s okay to share your feelings.’ But he recommends to choose someone who you trust and who can really listen.

Emmanuel quotes Les brown, saying, ‘Ask for help, not because you are weak, but because you want to remain strong.’

Emmanuel’s story is a part of the Tackling the Challenge Project, a collection of local men’s stories, about resilience and recovery. If you have a story to share or would like to know more, contact Deborah Ferry on 4621 8704 or Deborah.Ferry@health.nsw.gov.au.