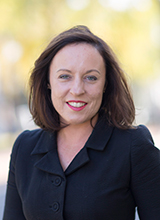 Dr Sheree Gregory is a Lecturer in Human Resources and Management in the School of Business, teaching Innovation and Professional Practice, and Managing People at Work. Sheree is a joint editor of two monographs on Women and Work (RMIT 2005, 2007) and Reviews Editor of Media International Australia (SAGE). Her interdisciplinary research deals with changes in work, business, households and family life. Her focus is on the problem of inequality, and investigating the challenges faced by workers who are marginalised and disadvantaged, and those of wealthy family businesses, particularly how tensions are managed.

Her current Women's Fellowship project is entitled, 'Barriers to Women's Employment Participation in the Cultural Industries: A Case Study of Gender Equality Policy and Practice in the Film and Television Industry'. Sheree was selected as a visiting scholar to the University of Economics Ho Chi Minh city in Vietnam in July 2016 for cross-cultural research development around her work on the entrepreneurial urban economy and family business networks.

As a scholarly academic with a growing public intellectual profile, Sheree is frequently called on for invited keynote addresses in community forums, industry conferences, seminars, and Dean's lectures. Her work is featured in industry magazine and national newspapers in Australia and internationally. She has been an invited reviewer for a prestigious publisher on proposed books in gender, family business and entrepreneurship.

Dr Gregory aims to improve the working life of employees and managers in businesses by exploring the theoretical and practical implications of notions of 'cultural intelligence', and 'domesticity ideology' in her research around equality, households and business in the 21st century. She is a champion of collaborative social and cultural research for business and has worked with partner organisations such as GM Holden, Pitcher Partners, and the Media Entertainment and Arts Alliance, among others.

Prior to joining Western Sydney University in 2015, Sheree was a lecturer in the School of Management at RMIT University, covering HRM, Organisational Behaviour, Introduction to Management, Global Entrepreneurship, and International Business, and has taught in Australia and Singapore.

Gregory, S 2016, 'International women's day: equality and work in the screen industry under the microscope', Institute for Culture and Society Blog, 8 March 2016.

Gregory, S 2016, 'Behind the scenes: new research will shine a light on the precarious work/life balancing act in the entertainment industry', Equity Magazine, Media Entertainment and Arts Alliance, January 2016.