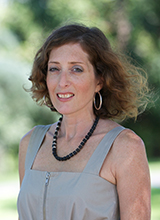 Alana Lentin is a Professor in Cultural and Social Analysis at Western Sydney University. She is a Jewish woman who is a settler on Gadigal land. She works on the critical theorization of race, racism and antiracism.

She is a graduate of the European University Institute where she earned her PhD in political and social sciences in 2002, and the London School of Economics (1997). Prior to joining the School of Humanities and Communication Arts at Western Sydney University, she was a Senior Lecturer in the Department of Sociology at Sussex University (2006-2012). Before this she held a Marie Curie EC Research Fellowship at the Refugee Studies Centre at the University of Oxford (2003-2005). In 2017, she was the Hans Speier Visiting Professor of Sociology at the New School for Social Research in New York and has previously been a visiting scholar at the Institute for Cultural Inquiry in Berlin (2010).

She is co-editor of the Rowman and Littlefield International book series, Challenging Migration Studies (opens in a new window) and former President of the Australian Critical Race & Whiteness Studies Association (opens in a new window) (2017-20). She is on the editorial board of Ethnic and Racial Studies, Identities, Journal of Australian Studies, Critical Race and Whiteness Studies, and the Pluto Books series, Vagabonds.

Her current research examines the interplay between race and digital technology and social media. Her most recent research project analysed the use of ‘antiracism apps’ for education and intervention.

Her books include Why Race Still Matters (Polity 2020), The Crises of Multiculturalism: Racism in a neoliberal age (with Gavan Titley 2011), Racism and Sociology (2014 with Wulf D. Hund), Racism (2008) and racism and Anti-racism in Europe (2004). She has written for The Guardian, OpenDemocracy, ABC Religion and Ethics, The Conversation, Sociological Review and Public Seminar. She has been interviewed for The Minefield on ABC Radio National, local ABC radio, Japanese television and Korean radio among others. She teaches a Masters course, Understanding Race which is accompanied by a series of blogs and an open syllabus available at http://www.alanalentin.net/teaching/ (opens in a new window).

Her personal website where she blogs extensively is www.alanalentin.net (opens in a new window)

Lentin, A 2004, Racism and anti-racism in Europe, Pluto Press, London.

Alana Lentin presents a lecture on 'Race, Post-Race' at the Institute for Cultural Inquiry in Berlin (double click for full screen).