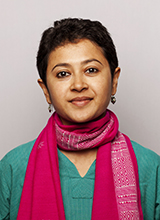 Malini Sur is a Senior Research Fellow at the Institute for Culture and Society and teaches anthropology at Western Sydney University. She holds a PhD from the University of Amsterdam (2012). Her research addresses three lines of inquiry – agrarian borders, urban space and environment. The first examines fences, transnational flows, and citizenship. A second line of inquiry explores the relationship that mobility has to urban space, and specifically, with regard to bicycling and construction sites across Asian cities. Finally, she examines the afterlives of natural disasters, air pollution, and climate change. As an anthropologist, she researches these themes historically and with keen attention to visual representation. She has conducted fieldwork in Bangladesh and India, and with South Asian asylum seekers in Belgium.

Malini's publications have appeared in academic journals like Comparative Studies in Society and History, HAU, Mobilities, and The Economic and Political Weekly. She has co-edited a collection of essays entitled Transnational Flows and Permissive Polities: Ethnographies of Human Mobility in Asia (Amsterdam University Press, 2012). Her public writing has appeared in Himal, The Telegraph and Scroll.

Photographs from Malini's fieldwork on South Asia's borders have been exhibited in Amsterdam, Berlin, Bonn, Chiang Mai, Gottingen, Heidelberg, Kathmandu and Munich. Her first documentary film Life Cycle, about the politics of cycling in the city of Kolkata, has been screened at the City-Mojo Film Festival (Perth 2017); the Australian Anthropological Society (Sydney 2016); The 4th Peoples Film Festival (Kolkata 2016), the Centre for Studies in the Social Sciences Calcutta (Kolkata 2016) and The Substation (Singapore 2016). This documentary is based on nine months of fieldwork with cyclists, vendors and environmentalists and has been gleaned from over 100 hours of footage. It is a product of her ongoing dialogues with urban cyclists, NGOs, environmental activists, citizen's associations, and market committees in India.

Malini regularly walks along the Parramatta River. Aspiring graduate students in anthropology and sociology who would like to join for a river walk talk may write to her at m.sur@westernsydney.edu.au.