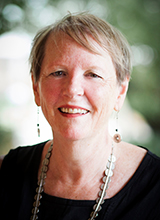 Professor Katherine Gibson is internationally known for her research on rethinking economies as sites of ethical action. She trained as a human geographer with expertise in political economy and, with her collaborator for over 30 years, the late Professor Julie Graham, developed a distinctive approach to economic geography drawing on feminism, post-structuralism and action research. The diverse economies research program they initiated has become a vibrant sub-field of study within the social sciences. In the late 1990s the collective authorial voice of J.K. Gibson-Graham led the critique of capitalocentric thinking that was blocking the emergence of economic possibility. The end of capitalism (as we knew it): a feminist critique of political economy published in 1996, was republished in 2006 with a new Introduction and named a Classic in Human Geography by the leading journal Progress in Human Geography in 2011. Gibson-Graham's work on a post-capitalist economic politics has had a widespread readership among those interested in economic alternatives and has been translated into Chinese, South Korean, Turkish, Spanish and French.

Prior to joining Western Sydney University in 2009 Professor Gibson held positions as Professor and Head of the Department of Human Geography in the Research School of Pacific and Asian Studies at the Australian National University (1999-2008) and Director of Women's Studies at Monash University (1992-1995). She has directed action research projects with communities interested in alternative economic development pathways in Australia, Papua New Guinea, the Solomon Islands and the Philippines. These experiences have contributed to elaboration of a distinctive 'Community Partnering Approach to Local Development' (opens in a new window). In 2008 she made a 50 minute film on social enterprise development as a local development strategy in the Philippines. Her most recent book, co-edited with Gerda Roelvink and Kevin St. Martin, is entitled Making other worlds possible: performing diverse economies (University of Minnesota Press, 2015). In 2013 she published Take back the economy: an ethical guide for transforming communities, co-authored with Jenny Cameron and Stephen Healy (University of Minnesota Press).

The Community Economies Collective (opens in a new window), which Gibson-Graham established, is an ongoing collaboration between academic and community researchers and activists in Australia, North America, Europe and South East Asia. The goal of the Collective is to theorise, discuss, represent and ultimately enact new visions of economy. By making multiple forms of economic life viable options for action, the Collective aims to open the economy to ethical debate around concerns such as: the survival needs of humans and earth others; the distribution of surplus that supports wellbeing now and in the future; encountering others via just transactions; enlarging and sharing our commons; and investing in futures that sustain us all.

Mathie, A, Cameron, J & Gibson K 2017, 'Asset-based and citizen-led development: using a diffracted power lens to analyse the possibilities and challenges' (opens in a new window), Progress in Development Studies, vol. 17, no. 1, pp. 54-66.