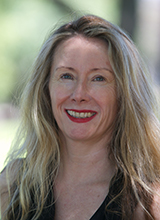 Associate Professor Fiona Cameron is Principal Research Fellow, Contemporary Museologies and HDR Director at the Institute. Working at the intersection of social, ecological crises and digital transformation, Fiona researches contemporary global transformations in culture and society for positive change. Cameron is committed to building the capacity of museums to realise their full potential in societal debates and climate action, and in the context of rapid digital change.

Fiona works across two broad research fields. The first examines the agency of the museum sector in public culture in the representation of 'hot' topics of societal significance and climate change. The second area of research interest investigates digital cultural heritage in transformation through the emergence of new digital heritage forms and more-than-human curatorial figurations.

Fiona has played a pioneering role in the establishment of the field of digital cultural heritage studies, prompting reform in theory and practice to embrace digital data. She has also been instrumental in shifting museum thinking from modern concepts to materialist and ecological precepts, and in pioneering the fields of museums and the environmental and critical posthumanities.

She is internationally acclaimed for her leading research on museum roles and agencies in the engagement of controversial topics through her postdoctoral work, and from the mid-2000s activating museum engagement in climate action.

Fiona has an outstanding track record in engaged research leadership and management in interdisciplinary and cross-sectoral collaborations with museums, communities and academics. Informed by her extensive curatorial background, supported through 8 Australian Research Council grants (6, lead Chief Investigator; 2, Chief Investigator, 2), 13 international fellowships including two professorial appointments, 11 international grants with 5 European universities, 59 European, North, South American and Australasian museums, and museum peak bodies, Fiona’s work has had high sectorial impact leading to innovation in theory, policy and museum practice.  Cameron’s work is widely utilized in HDR training and has enabled museum institutions to more fully engage with urgent social and environmental concerns as key institutions at the centre of civic life. Fiona is frequently called on as a keynote and plenary speaker at international conferences.

Fiona is also a museum practitioner and has worked in the sector as a museum director, a social history curator and as a curatorial consultant on major exhibition projects in New Zealand, Australia and Singapore.

In March 2011 Fiona led an Australian federal parliamentary briefing A Climate for Change on the findings of the ARC Linkage grant, 'Hot Science, Global Citizens: the Agency of the Museum Sector in Climate Change Interventions' to parliamentarians, government department employees, academics and the museum sector. Subsequently, she has led and contributed to national and international climate policy forums including the UNFCCC, influencing policy.

She has 85 publications including 6 books on these topics with leading publishers, MIT Press, Duke University Press and Routledge and in highly ranked journals. Fiona’s work has been translated into Arabic, Hungarian, Russian and Estonian.

A list of Fiona Cameron's keynote and plenary addresses can be found here.

Current research projects include the following:

This newly funded Australian Research Council Linkage project with the Museum of Applied Arts and Sciences, Sydney utilizes a transdisciplinary framework to investigate how museum collections many of which are entangled in the high emissions sector can be put to work for climate change mitigation.

Lifetimes: A natural history of the present sets out to develop an alternative view of the temporal order of global society, in which the linear, homogenous times of modernisation is challenged by a multiplicity of rhythms, speeds, and durations, in various historical and geographical contexts, emerging from lives unfolding on and in the planet, as well as in the universe.

Focusing on Viking collections, this project funded by the Bank of Sweden with the Swedish History Museum explores the multiple forms of curatorial agencies and their affects that develop when museum collection digitisations, narratives and new research findings circulate online.

A full list of funded projects can be found through this link.