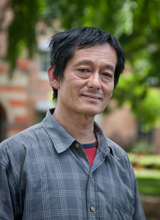 Dr Phillip Mar has worked as a researcher with the Institute for Culture and Society (formerly the Centre for Cultural Research) at Western Sydney University since 2008.

Mar, P& Ang, I 2015, ‘Promoting Diversity of Expression in the Arts in Australia’, Report to Australia Council for the Arts, Sydney.