The Sydney Olympics: How Did the ‘Best Games Ever’ Change Australia? 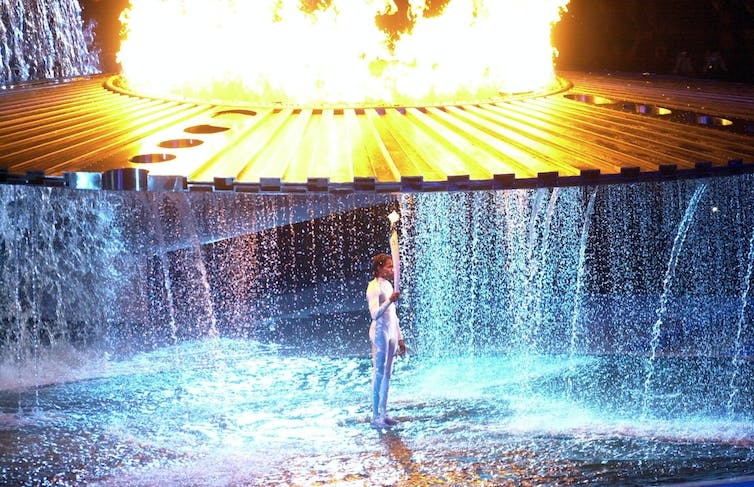 On Tuesday, it will be 20 years since the Olympic opening ceremony in Sydney, kicking off the “best games ever” (opens in a new window).

It was certainly a very big party. But with the hindsight of 20 years, other than creating a lot of classic sporting memories, did the Olympics change us?

There is considerable ambivalence (opens in a new window)regarding Sydney 2000.

The economics of mega sports events are notoriously slippery and difficult to work out.

In 1993, KPMG estimated there would a more than $7 billion benefit to the national economy. But subsequent analyses produced other figures. A 1998 estimate (opens in a new window)by University of Tasmania and NSW Treasury economists suggested there would be only a 0.11% effect on GDP over the 12-year Olympic phase.

On other measures, the impact is also difficult to see.

The main Olympic site did create usable space and parklands on what was a huge, derelict industrial site in Sydney’s west. The athlete’s village also became a solar-powered suburb (opens in a new window). But two decades on, Sydney Olympic Park is still searching for a soul (opens in a new window)during the working week.

So, where did Sydney 2000 leave its biggest mark on 21st century Australia?

Australia had held the Olympics before Sydney, but Melbourne in 1956 was a very different affair. There were fewer than 100,000 television sets (opens in a new window)in the country and no live international satellite transmission.

Sydney 2000 provided a striking opportunity for Australia to project a global image as a sophisticated, multicultural nation. 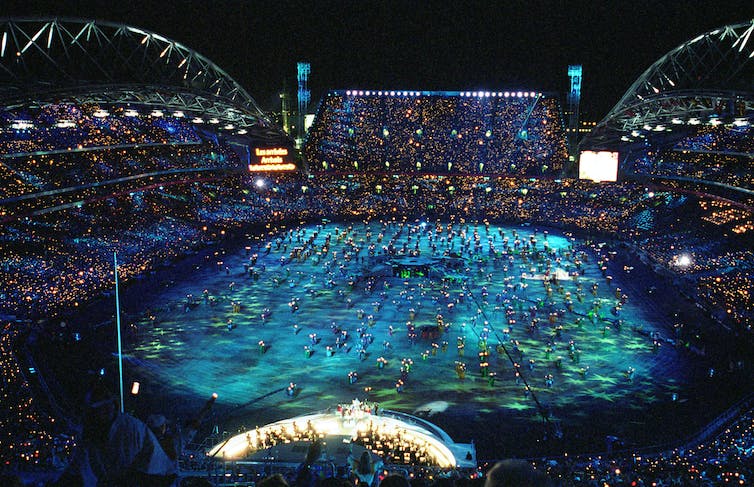 Although Olympic tourism promotion (opens in a new window)relied heavily on Australia’s natural environment, its strategy made room for showing Australia as a highly urbanised, culturally diverse society.

Most importantly, Australia avoided the huge reputational hit of getting the games “wrong”. Only four years earlier, the 1996 Atlanta Olympics were widely criticised (opens in a new window)for being poorly organised and over-commercialised. It also had to contend with a domestic terrorist bombing (opens in a new window).

In the lead up to the games, I was interviewed by a number of foreign journalists doing background stories. One topic dominated all others – the state of Indigenous relations in Australia.

A considerable effort was made by the Sydney Olympic organising committee to involve First Australians. As a result, one of the most powerful and enduring themes of the games was Indigenous Australia (opens in a new window). 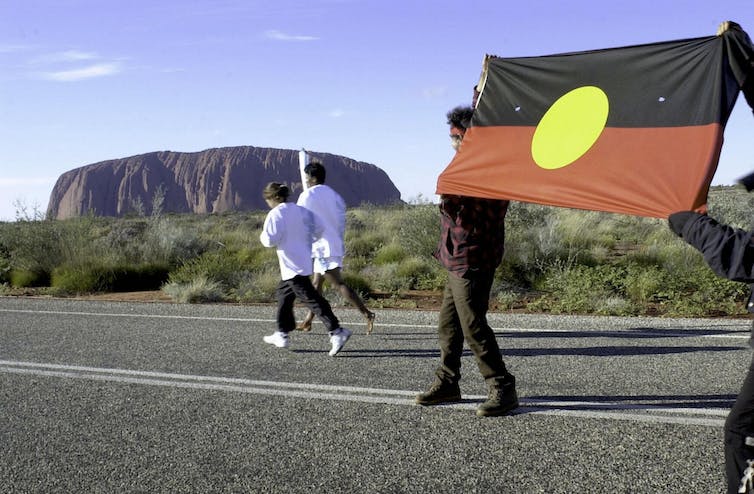 The Olympic torch arrived at Uluru in June 2000. Steve Holland/AP.

And most memorably, Cathy Freeman (opens in a new window)lit the Olympic cauldron and won the women’s 400 metres, bearing the sky high expectations of the nation as she ran.

In the era of Black Lives Matter, nobody could claim that Sydney 2000 had a transformative impact on Indigenous peoples’ futures.

Read more: Why the Black Lives Matter protests must continue: an urgent appeal by Marcia Langton (opens in a new window)

But its legacy - that any representation of Australia must always have a deep, serious Indigenous presence - should not be underestimated.

As the largest sporting event ever held in Australia, the Sydney games had a ripple effect (opens in a new window)across the entire sport landscape in the country.

Its success signalled that Australia was capable of hosting mega sport events with efficiency and flair. 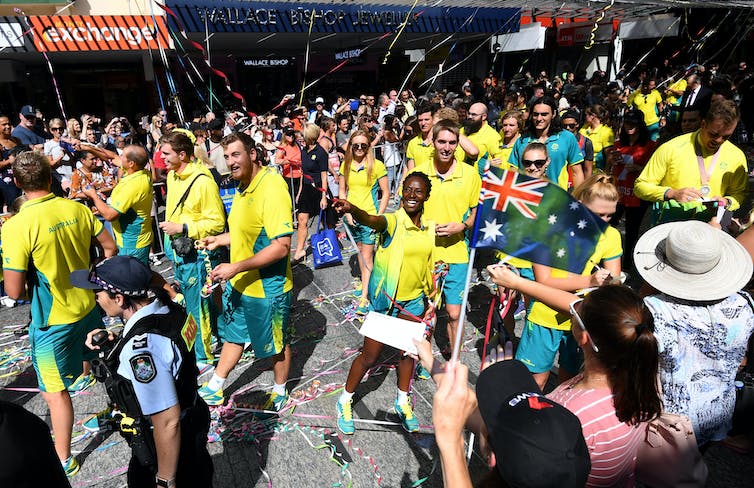 Australia has gone on to host a swathe of successful international sporting events post 2000. David Peled/AAP.

The Olympics paved the way for successive Australian sports diplomacy strategies (opens in a new window). These include promoting Australia’s expertise in helping other countries host major events, not least their opening and closing ceremonies.

Importantly, Sydney also provided a very substantial boost to the Paralympic Games (opens in a new window)a legacy of which the nation can be justly proud.

Read more: A brief history of the Paralympic Games: from post-WWII rehabilitation to mega sport event (opens in a new window)

Australia was already a renowned sporting nation before Sydney 2000. Afterwards, it could claim to be an influential player (opens in a new window)in global sport.

The Sydney games were fortunate the 9/11 bombers (opens in a new window)did not make their move in New York precisely one year earlier, which would have meant disruption and possible cancellation. 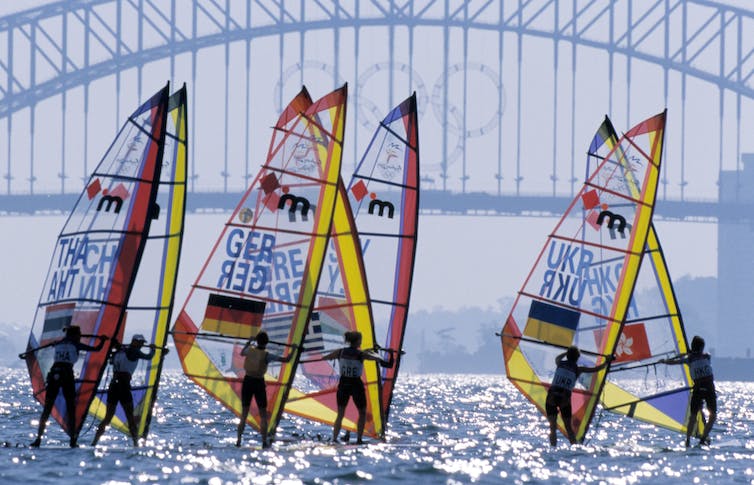 The Sydney Games were lucky to have two weeks of good weather. And no catastrophes. Dean Lewins/AAP.

Unlike the postponed Tokyo 2020 (opens in a new window)(and possibly cancelled) Tokyo 2021 Games, Sydney was also lucky not to coincide with a global pandemic.

Sydney 2000 shows that legacy is, finally, dependent as much on luck as good planning. But those 17 days in September linger as a significant moment in Australia’s sporting and social history, when the country was at the heart of the global village.