The world premiere of The Bamboo Bridge, a film directed by Associate Professor Juan Francisco Salazar, screened at Antenna Documentary Film Festival this week. In the awards ceremony on Wednesday night, the film received Special Mention in the Best Australian Documentary category. 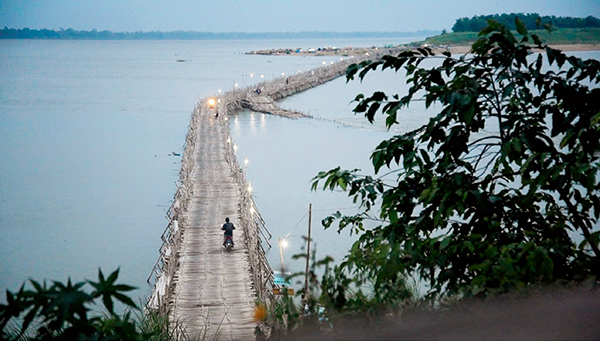 The film tells the story of a 1.5km bamboo bridge built across the Mekong River in Cambodia every dry season, and then dismantled after the monsoonal tides. In 2017, the bamboo bridge was built for the last time, when a massive new government-funded concrete bridge was inaugurated. Juan Francisco Salazar's (Nightfall on Gaia, Antenna 2015) poetic, beautiful-shot film engages with three generations of bridge builders who share stories of the unique sustainable infrastructure and the diverse economies it sustained. Focusing on the last master builder, Mr Oun, the film explores the intricacies of traditional forms of sustainable living. The river, the monsoon, the cycles of bamboo and the bridge all tell and urgent and ancient story. Are we listening?

The first screening was held on Tuesday evening at Chauvel Cinema Paddington. It will show again on Saturday 26 October at Riverside Theatres Parramatta, and on Sunday 27 October at Verona Cinema. Tickets through Antenna Documentary Film Festival (opens in a new window).