With support from the Institute for Culture and Society at Western Sydney University, historian Dr Benjamin T. Jones designed the Alternative Australian Flag Survey to explore attitudes and opinion towards this national symbol. The survey was opened on 16 December and closed on 25 January. During that time 8140 people took part, however, not all participants answered all questions. The following is a snapshot of the survey's findings.

Background: 63% (5034) of participants identified as Australian with British or Irish heritage. 3% (274) identified as Aboriginal or Torres Strait Islander. 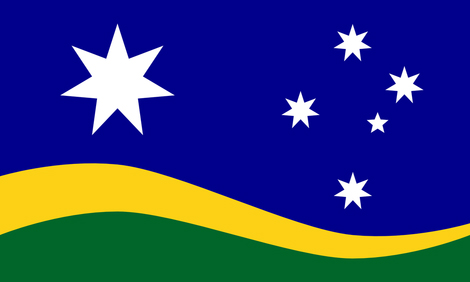 This result mirrors the New Zealand poll. The winning alternative design, the Silver Fern, maintained the blue background and red stars of the current New Zealand flag. Similarly, the Southern Horizon maintains the blue backdrop, Southern Cross and Federation Star. In both cases, the most popular design had minimal change but removed the Union Jack.

The Alternative Australian Flag Survey is far from definitive but with over 8000 participants it provides a useful snapshot of attitudes towards a new flag. The survey suggests that white Australians with British, Irish or European background are the most interested in this issue. These groups combined made up 88% of participants. Similarly, older Australians are more likely to care about the flag than younger Australians. 45% of participants were over the age of 45 (19% were 46-55 and 26% were Over 55).

Those who support a new flag fall primarily into two categories; those who want a neutral design with some link to the current flag and those who want a completely new design with specific recognition of Aboriginal and Torres Strait Islander peoples. One of the largest criticisms of the Reconciliation flag was its complexity, however, there are alternative versions that have fewer colours and a solid yellow Federation Star rather than the 250 small dots. This version is likely to poll better. The Southern Horizon flag also has an alternative version with straight green and yellow lines at the bottom rather than the wave design.

The response to this survey has been passionate and enthusiastic. A government-run alternative flag poll following the New Zealand model would provide a fair and democratic way to answer two separate but often conflated questions. It must first be asked what an alternative Australian flag should look like. After a popular design is chosen, the second question is if it is preferred to the current flag.

Not all participants left comments but many did, explaining why they chose a particular flag. While the Reconciliation Flag ran a close second, Southern Horizon was the most popular and is perhaps the most likely to win a broad support base of Australians.

Participants in the Alternative Australian Flag survey have suggested that the key issue is removing the Union Jack. Southern Horizon takes a minimalist approach. It maintains the blue background with the white Southern Cross and Federation Star. Significantly, the Union Jack is replaced in the upper hoist (top left corner) with the Federation Star. In vexillology, the upper hoist is traditionally where the dominant power is displayed. Particularly with naval ensigns, the upper hoist reveals which power the vessel belongs to. Replacing the Union Jack with the Federation Star in this strategic position has proved popular as it suggests that rather than the British monarchy, the citizens of Australia and their democratic system of government is the ultimate source of power. Above: the three most popular designs

For the initial story on the survey, including descriptions of the designs see 'Six Credible Alternatives to the Australian flag'.