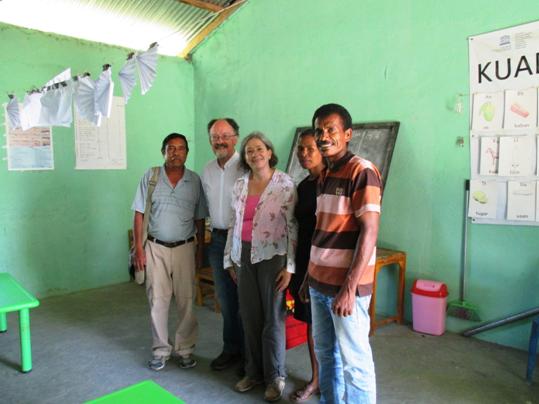 When Timor-Leste achieved independence from Indonesia 12 years ago, Timorese people were not only left with the task of rebuilding the country’s shattered infrastructure, but they were forced to re-establish the local customs and practices that were damaged or destroyed by the departing colonial power.

In the midst of the country’s re-emergence were questions over the type of society the East Timorese wanted to recreate for themselves. For a nation that is accustomed to speaking a variety of native tongues, one of the biggest questions was the languages the authorities would choose to recognise and promote as the official languages.

As it stands, the country aspires to be a modern, multi-lingual society which operates with four main languages—Tetun and Portuguese as official languages, and  English and Indonesian as working languages. Yet many children start school only knowing one of the at least 16 mother tongues spoken in the different regions. This means they need to be taught how to read and write in languages they do not understand in order to reach their full potential in their new society.

To help assist these native speakers learn the 'official' languages, The Timor-Leste Education Commission of UNESCO and the Timor Leste Ministry of Education have developed a pilot project teaching beginning literacy in children’s own mother tongues. ICS researchers Professor Bob Hodge (opens in a new window) and Dr Gabriela Coronado visited Timor-Leste from 7-14 April as consultants for the Timor-Leste National Commission for UNESCO to collaborate in evaluating this project.

During the visit, Professor Hodge and Dr Coronado critically evaluated the effectiveness of the Mother Tongue Based Multilingual Education Project which began in 2012 aiming to design and implement a curriculum to develop literacy in their own mother tongues first and later transfer such capacities into the official languages.

Joining them were Dr Kerry Taylor-Leech from Griffith University and Dr Jo Caffery from the University of Canberra.

The researchers are now preparing a report to evaluate the program and suggest ways it can improve, as well as provide critical evidence of its value and potential as a mainstream education tool for Timor-Leste.

It is hoped the team’s work will form the basis for a larger project to be funded by the Australian Research Council or similar body, as the successful education of all the citizens of this new nation is of vital importance.