During COVID-19 lockdowns, a major concern for LGBTIQ+ communities, mental health professionals and academics was that young lesbian, gay, bisexual, trans, queer and questioning, intersex and asexual+ people may suffer from being stuck in transphobic, biphobic or homophobic households.

But encouragingly, our research found these young people largely managed to navigate these spaces successfully, by increasing their social media use, exploring identity through digital channels and finding safe ways to maintain family relationships.

We spoke to 65 LGBTQIA+ people aged 16–30 from across Australia, with cultural backgrounds including Indigenous, European, South Asian, Middle Eastern and East Asian. For many, isolation provided an opportunity to reflect and build on their identity.

Surfing the web during lockdown

We spoke to queer people who identified as gay, lesbian, bisexual, asexual, pansexual and demisexual — and with various gender identities such as cis male/female, intersex, non-binary, trans, gender-fluid, agender and questioning.

Our respondents expressed having generally increased their social media use during COVID-19 lockdowns, when they were forced to stay home. As a result, they reflected on and explored their gender and sexual identity online more than usual. One interviewee said:

"It was definitely a big help just to have a chance to think about it on my own for a bit, instead of having to do other stuff."

The group reported using social mediums such as Instagram, TikTok, Facebook, Snapchat and Discord to find others like them — and to discover language that helped them make sense of their own feelings and desires (which is often absent from classrooms).

During lockdowns, respondents had to actively decide what information to share with family and how to navigate these relationships online and offline.

Meanwhile, they also found ways to relate to and safely connect with other LGBTQIA+ people online. This is what experts call online “curation”. One young panromantic demiboy said:

"I’m in a lot of private groups that are sort of other people from either Australia or across the world that just describe their experiences […] having a lot of other people around you that are in the same boat is just, you know, just really reassuring."

Online friends helped build an important sense of community, which then created space for discussions on gender and sexuality which may not have been possible with families. Some respondents curated their online spaces with family in mind. For example, they would deliberately not be explicit about gender and sexual identity on certain platforms, due to concerns about repercussions for their parents. Thus, concern for loved ones shaped the way they used social media.

And while LGBTQIA+ communities were indeed important, this wasn’t all respondents looked for. Their online communities were made up of LGBTQIA+ people and others who enjoyed cosplay, gaming, art, baking, fandoms and anime.

Young queer people, like all people, are multifaceted and have a variety of interests, so identity work happens alongside hobbies and fun. One queer trans man we interviewed said his circles featured a strong mix of both queer and fandom themes:

"I tend to find the queer community within the fandom really, really quickly."

But social media has its downsides

We know queer online spaces themselves can be prejudicial and have examples of transphobia and discrimination against bisexual individuals.

Our respondents mentioned their experiences teaching others (both straight and LGBTQIA+ people) about gender and sexuality online. Many valued an educative approach for people with prejudicial and discriminatory ideas.

We found the onus of this work often fell on them, while they emphasised it was a balancing act; they didn’t always want to engage with negative material about themselves or similar groups. 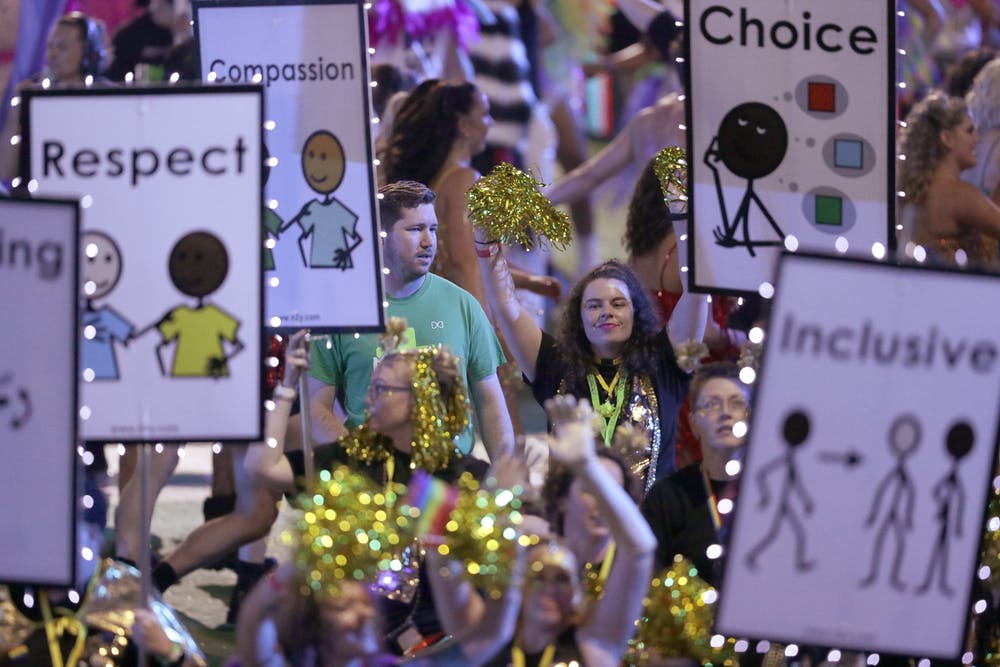 Attendees at this year’s Gay and Lesbian Mardi Gras parade at the Sydney Cricket Ground. The event took place in the stadium due to COVID-19 restrictions. Rick Rycroft/AP

Notwithstanding obvious differences in lived experience, our findings indicate LGBTQIA+ youth know how to find creative, resourceful and intelligent ways to thrive online.

Yet it’s imperative society at large continues to support LGBTQIA+ youth and help make sure their experiences are not negative. There are a few ways this can be done: