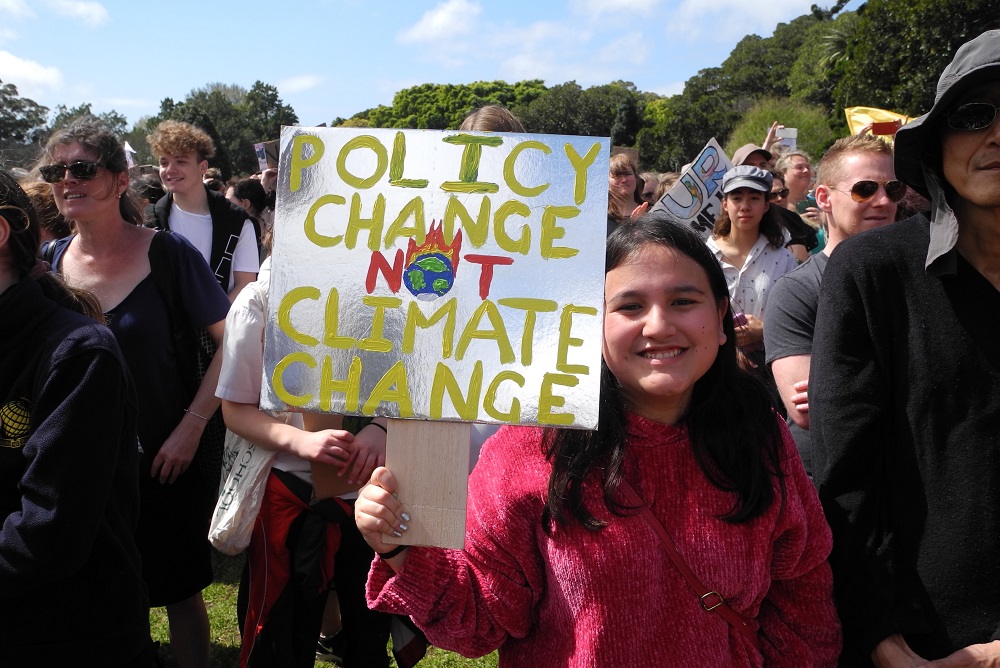 Academics at Western Sydney University’s Young and Resilient Research Centre have joined with an international team of researchers to study the rolling Global Climate Strikes held, by collecting data at the protests held in September 2019. The results have been published in a report (opens in a new window), released this week.

The researchers examined survey data from 19 cities in 16 countries, including four cities in Sweden, home of School Strike for Climate founder Greta Thunberg.

A team of fourteen interviewed protesters at the Domain in Sydney and distributed QR-coded flyers which linked to a follow-up survey online for the Australian contribution to the global report.

'We asked protesters about their own actions on climate change, as well as for their views on government, business, scientists, and climate justice,' says Ingrid Matthews, one of the Sydney-based authors of the report. 'Across all age groups, individuals reported changing or cutting their consumption habits to reduce energy use.'

Text analysis software showed that the most prominent word in the reasons people gave for being at the protest was ‘action’. 'It is a very clear message,' Matthews says. 'People are on the streets because they care about the planet, the next generation, and the future. They want government action on climate change.'

Another section of the online survey asked protesters to rank their feelings when thinking about global warming or climate change. 'Frustration was by far the strongest emotion on the scale,' says Associate Professor Philippa Collin, who directed the Sydney-based part of the project. 'People of all ages – but particularly students - are very frustrated by inaction on climate change. The next strongest sentiments were anger and worry, which were ranked almost equally'.

Mindful of the potential impacts on young people when asking about climate change, the Sydney team developed separate surveys for under 16 year olds that asked about determination and hope. 'Frustration and worry topped the kids’ emotional responses too', says Matthews, who analysed the youth surveys, 'while the response to feeling determined was more muted'.

The context of this research is the third Global Climate Strike organized by the Fridays For Future (FFF) protest campaign on Friday 20 September 2019. In Australia, the protests were organised by the School Strike 4 Climate. The movement mobilised 6000 protests in 185 countries, bringing an estimated 7.6 million protestors onto the streets.

Global: A typical FFF demonstration is populated by school and university students, as well as non-student adults of all ages, including parents accompanying school-aged offspring. The report emphasises that while young people have the most at stake, and Fridays for Future is a youth-led movement, growing numbers of adults are joining in a show of intergenerational solidarity for action on climate.

Sydney: The majority of survey respondents in Sydney were women and girls; and most respondents were attending their first Climate Strike. Of those who had marched before, most (over two-thirds) had been to one previous Climate Strike.

Young people: many more young people are motivated to 'tell the government to do something' and 'stand up for what I care about' than to 'show I care about climate change too'. While the formal political arena is characterised by spin and gesture politics, young people at the protest expressed authentic desire for political action. Few young people chose the option 'someone asked me to' as a motivation to attend. This may also reflect the gender ratio, in a society where collective action and co-operation are associated with a feminist ethic of care; while the grand gesture, and pursuit of "rational self-interest", is more vigorously promoted to boys and men.