What Sam Burgess' Face Tells Us About Australian Sport 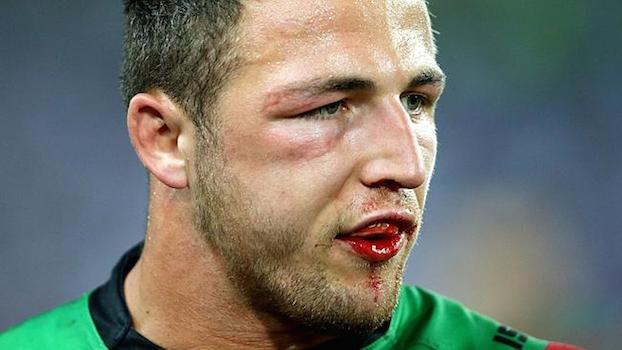 In an opening scene of the 1996 film Jerry Maguire an injured ice-hockey player lies in a hospital bed in traction with a concussion. Outside the player's room his agent, Jerry Maguire, is confronted by the player's son:

Son: This is his fourth concussion. Shouldn't somebody get him to stop?

Jerry: Come on – it'd take a tank to stop your dad. It would take all five Super Trooper VR Warriors, right?

The son turns away in disgust at the lack of concern over his dad's health, leaving with a few choice words and a universally recognised single-digit hand gesture.

Concern over head injuries sustained by athletes is no longer confined to the realms of fictional movies. The health of players in contact sports such as ice-hockey and the various football codes is currently receiving much focus. Despite increased concern in America over the dangers of head injuries and concussions(opens in a new window) resulting from sports collisions, Australian sports fans continue to celebrate those players that put their bodies and long-term health on the line in the pursuit of sporting success.

Body on the Line

In the very first tackle of the National Rugby League's (NRL) showpiece Grand Final, South Sydney player and England international Sam Burgess suffered an injury after a collision of heads with Canterbury's James Graham. Burgess went on to play the entire game and was later named the Clive Churchill Medal winner for being the best player on the pitch. Scans later revealed that Burgess had not only fractured his cheekbone but also his eye socket(opens in a new window) in this incident with Graham. After the match, the player himself suggested that he couldn't remember much about the game – an indication that he may have suffered a concussion(opens in a new window). Burgess required surgery to repair the fractures and had a plate inserted into his face. He was also given the keys to the city of Sydney and lauded as a hero. Comparisons were made to a legendary former player, John Sattler, who had played the majority of the 1970 final with a broken jaw.

Response in the media was interesting. The Daily Telegraph, a New South Wales-based tabloid that is pro-rugby league, suggested that Burgess was a "bloody legend" and asked whether there had "ever been a more deserving Clive Churchill medallist in an NRL grand final." While a number of media sources also enthused over Burgess' performance and bravery, other sources criticised the decision to allow Burgess to play on and to put his long-term health at risk. In particular Peter FitzSimons, a former rugby union player-turned journalist, was quick to highlight Australia's lax attitude towards concussions (opens in a new window).

Australia has a history of celebrating such "manly" displays in sport. Sports such as rugby league and Australian football (AFL) are valued in part because they are tough and physical games. In contrast, association football historically has been seen as an effeminate sport that lacks the required levels of physicality to be classed as a truly Australian sport. Soccer has struggled for acceptance as a result of this image and was long seen as only being fit for females and weak males.

In recent years, there have been complaints from fans and pundits that even the games seen as typically Australian – rugby league and Australian rules football – have become "soft" and too sanitised. Rugby league in particular has witnessed calls for a return to greater physicality within the sport, including appeals to the NRL to "bring back the biff" In this context "the biff" refers to players fighting and throwing punches, which many observers see as part of the sport. The calls to allow players to throw punches have been driven by both former and current players but they are echoed by fans of the sport. Current players believe that rules against fighting and punching are not allowing them to let off steam; going as far as to say that they are being made to "look like idiots." Some ex-players have suggested that most fans loved to see punch-ups and that such physicality made the game "a better spectacle".

Australians take pride in their Australianness and celebrate iconic figures that exemplify this concept. However, while these figures are seen as images that typify Australian national identity, it should be noted that these images may be a mythical construction of what it means to be an Australian. Since the nineteenth century these images have ranged from the bushman, through the digger (Australian and New Zealand soldiers), to the surf lifesaver. All of these figures have, in their own way, embodied masculine struggles against adversity. In the case of the bushman, this struggle was against the harsh Australian landscape, for the digger it was enemy soldiers, while in the case of the surf lifesaver it was the sea. In the Australian media and popular culture, all of these figures – including the current national type, the sportsman – have been portrayed in ways that emphasise their masculinity and display their bodies to the admiring gaze of the public eye.

Images of Australians typically show tall, athletic, healthy, and bronzed men. The images of athletes that are used by clubs and the media tend to follow this pattern. By recreating elements and messages from these earlier images the club and press are tapping into a recognisable picture of Australianness and presenting players as depictions of strength, athleticism, and determination. An inherently masculine image of Australianness is presented and reaffirmed through these sporting images.

This degree of masculinity within Australian sport harks back to earlier descriptions of the typical Australian (by writers such as Russell Ward) where there was an assumption of maleness. John Eddy, writing in 1997, was of the belief that in Australia maleness was taken as a given and suggests that Australians have a reputation for being "male chauvinists." Although there have been a number of formal policy and cultural changes aimed at addressing this, there is still an attachment to masculine ideals in Australia. Nowhere is this attachment to masculinity more apparent than the sports fields of Australia. Women are often conspicuously absent from the playing field, team management and sports broadcasts, creating a taken-for-granted notion that maleness is the norm in sport. However, the various ideologies of Australian identity imbue an extreme definition of masculinity for males that emphasises power and control, along with self-reliability and significantly "separation from the feminine." The actions of Sam Burgess, in playing on in spite of a serious injury, provide an example of this extreme masculinity. The praise and acceptance of his attitude from the wider public is indicative of social approval of this.

Sport remains a key part of Australian culture, and males are encouraged to be physically aggressive and to use physical force to dominate others in contact sports. However, these ideals of masculinity are not confined to Australia's NRL. Parallels can be drawn to ice-hockey in Canada and American football in North America. There is a danger that extreme masculine ideals will continue to be reinforced throughout the on-field behaviour of high-profile players. Such role models set an example that is followed not just in sport but also within wider society. Given the prominence of players such as Sam Burgess, surely it is time that more people asked: "Shouldn't somebody get him to stop?"

This article was originally published in The Allrounder .