Laos in 2016: Sustainable Development and the Work of Sombath Somphone

This piece was originally written for The Sombath Initiative (opens in a new window), which operates under Focus on the Global South. 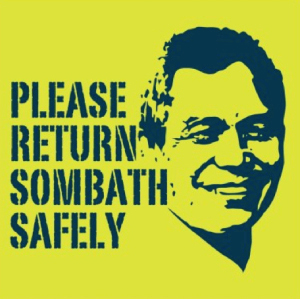 In 2016 it will be 20 years since the Government of Laos (GoL) first announced its goal to graduate from Least Developed Country (LDC) status by 2020.i During this time, much has changed. With the exception of a few years following the 1997 Asian financial crisis, economic growth has remained strong and in 2011 the World Bank raised Laos' income categorization from a low-income economy to a lower-middle income economy.ii Foreign Direct Investment has also growing rapidly and strong progress has been made on a number of the country's Millennium Development Goal (MDG) targets. This has led the UNDP to categorize Laos as the 6th most successful country for improved human development over the past 40 years.iii

Yet alongside these markers of progress, there is another story to be told about 'development' in Laos. This is a story of widening inequality, severe environmental degradation, human rights abuses, state and private sector corruption, persistently high maternal mortality and malnutrition rates, land grabbing and forced resettlement as well as tensions with fellow ASEAN countries over controversial Mekong hydropower projects.iv These widespread and often interrelated challenges have led to new forms of poverty and damaged the country's international reputation.

In regards to the latter, perhaps the most serious and persistent international condemnation in recent years has resulted from the December 2012 enforced disappearance of the Ramon Magsaysay award-winning community development worker Mr. Sombath Somphone. Occurring at a police checkpoint in Vientiane and captured on CCTV video, Somphone's abduction and the ongoing failure by the GoL to provide answers on his disappearance has received criticism from governments, human rights organisations, academic scholars and media organisations around the world.v It also likely played a decisive role in Laos' October 2015 failed attempt to gain a seat on the United Nations Human Rights Council.

The disappearance of Sombath Somphone remains a critical issue that the GoL must address. However, rather than discussing this issue in depth, this short article focuses on the community-oriented learning programs established by Somphone and the valuable insights that he offered for sustainable development in Laos.

The year 2016 will also mark the first time since 2004 that the Lao PDR will serve as the ASEAN Chair. As Laos approaches what will surely be an important milestone for its future, Somphone's development philosophies offer a valuable framework for moving forward.

The Work of Sombath Somphone

Sombath Somphone was born in 1952, in a small rural village in southern Laos. Like most families in the area his parents were subsistence farmers, however, Sombath's father also supplemented his farming work with a variety of small business ventures. These ventures often drew him away from the family home and in his absence Sombath was required to spend much of his childhood caring for his younger siblings. This was, at times, a difficult childhood, but it also provided Sombath with a deep appreciation of the value and strength of community in his country, as well as the many skills and talents that low-income families possess.

Also a keen student who often came at the top of his class, Sombath was awarded two scholarships to study in the United States; first as a 16 year-old secondary school student and later as a tertiary student at the University of Hawaii. After completing a masters in Hawaii Sombath spent almost two decades working on food security and sustainable agriculture in Laos and Cambodia before an opportunity arose to start his own organisation in Vientiane, which he called the Participatory Development Training Centre, or PADETC for short.vi

Established in 1996, PADETC is guided by the development philosophies of Sombath Somphone and, under his leadership, the organization grew from a team of just five founding staff members to 50 employees and over 2000 young volunteers. A key insight of Sombath's thinking is that many development interventions in Laos (and elsewhere) the central importance of culture and communal cohesion in bringing about sustainable change. This insight has since been shared by many others, and has led culture to become a key component of debates around sustainable development. However, few organisations have had the same successes as PADETC in transforming conceptual debates into practical interventions.

In order to align principles of human development and sustainability in a culturally sensitive manner, Sombath's development strategies place community-oriented learning at the centre of its development framework. Labeled by Sombath as a 'liveable communities' approach, PADETC's learning programs position culture as one of four essential pillars to sustainable development – or what Sombath has described as the development of the 'head' (wisdom), 'heart' (morals/emotions), and 'hand' (action).

Here, and in contrast to many other organizations, rather than constructing 'culturally sensitive' development practices from the 'outside' and focusing only on deficiencies and 'problems', Sombath's work offers a model that aims to build on community strengths. This is a community-oriented learning system that places culture at the heart of development by positioning communities as leaders in the conceptualisation and implementation of poverty-alleviation strategies. As Sombath states, 'it is only through consciously rooting our young in their culture, traditions, and values that we can expect them to know and respect the past, understand the present, and value and protect the future'.vii Consequently, what Sombath has sought to provide is a framework for development and education that is both 'inclusive of practical life-skills and relevant livelihood experiences', while also combining 'indigenous wisdom, traditional knowledge, and cultural values appropriate to the local area' with scientific practices.viii

In respect to specific policy initiatives, Sombath and his colleagues at PADETC created a number of innovative strategies for community-oriented learning and development, ranging from organic farming and waste management to sustainable energy production and the support of small and medium enterprises. They also developed youth radio stations to encourage community voice and peer-to-peer education sessions on issues ranging from children's rights to substance abuse. Recognizing that learning does not only take place within schools, Sombath has aimed to use learning centres across Laos to build cooperation between teachers, parents, civil society organisations and the wider community.

Laos has a mixed track record when it comes to poverty alleviation and development. While some development indicators have shown marked improvements, natural resources have also been rapidly depleted, people all across the country have been forced off their land for large-scale private investment and the GoL has committed numerous human rights violations against its citizens. While economic growth remains strong, Laos' ability to graduate from LDC status by 2020 – and to continue building a prosperous society for long beyond then – will require some dramatic changes in how the country approaches poverty alleviation and development.

In 2016 Laos will be the first country to serve as ASEAN Chair for the new ASEAN Economic Community. This is a big responsibility for the GoL that will bring considerable international attention and will provide Laos with an opportunity to demonstrate a strengthened commitment to principles of culturally sensitive sustainable development. As Laos approaches what will surely be an important milestone for its future, it would be well served to give greater attention to Somphone's ideas on development. Of course for this to happen, it is also essential that the GoL demonstrates a genuine commitment to providing answers on his abduction.

For a more detailed discussion on Sombath Somphone's work and its importance to the post-2015 development agenda see: Sims, K., 2015, 'Culture, Community-oriented Learning and the Post-2015 Development Agenda: A View from Laos', Third World Quarterly, 36(10), 1922-1943.