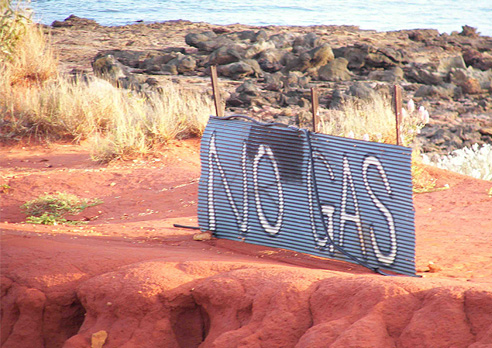 Aboriginal people are still deeply divided over the development of a $30 billion liquefied natural gas processing plant at James Price Point on the pristine Kimberley coast despite a vote for the proposal.

Kimberley traditional owner Neil McKenzie, who is challenging the Western Australian Government’s threat of compulsory acquisition in the WA Supreme Court and consequently the validity of the traditional owner vote to accept the development, will discuss the case and the gas hub’s threat to Aboriginal culture in Sydney’s indigenous centre, Redfern, on Saturday, July 9.

On May 5 this year, 60 per cent of traditional owners voted in favour of the Kimberley Land Council’s (KLC) $1.5 billion negotiated terms with Woodside Energy Ltd to build the LNG plant. But the vote was taken under the threat of compulsory acquisition of the land, or as former KLC boss Wayne Bergmann said, like having “a gun to our head”. The legitimacy of the compulsory acquisition and therefore the vote is now being questioned in the WA Supreme Court in an action taken by McKenzie and Phillip Roe, both traditional owners of James Price Point.

Those who oppose the gas hub fear that this type of development will kill their culture. They say, “if culture dies, the Mother dies”, and consequently, as Aboriginal people, they too will “die”. Those who support the gas hub, led by the KLC, say that WA Premier Colin Barnett’s threat of compulsory acquisition of the site left them with no choice, saying they would rather receive some benefits than get nothing from the profits and royalties that will flow from the LNG project.

McKenzie, an Aboriginal activist and environmentalist, will be joined in the discussion by another traditional owner, Kerrianne Cox, the award-winning singer-songwriter who also appeared in the musical Bran Nue Dae.

Deborah Ruiz Wall, a PhD candidate from the University of Western Sydney, will speak about the local people’s concerns and preferred development options based on her ongoing research, while Hala Razian will present the ongoing campaign work of The Wilderness Society in support of sustainable development in the Kimberley.

Final investment decision for the project is not due till mid 2012, and Federal environmental approval has yet to come through. There is still time to Save the Kimberley and its Cultural Heritage. You are invited to participate in this open forum discussion and learn about an issue that affects all Australians.