Governance, Human Rights and Development in Southeast Asia and Beyond

In the lead up to his fieldwork in Laos, PhD candidate Kearrin Sims recently travelled to Bangkok, Thailand, to deliver a paper at the First International Conference on International Relations and Development: Governance, Human Rights and Development in Southeast Asia and Beyond. More than 130 scholars from a variety of disciplines attended, including many academics from within Southeast Asia. Hosted by Thailand’s Thammasat University, the conference was held over two days from the 19th-20th May 2011. This date marked the one-year anniversary of the Thai political uprisings of May 19 2010 and the conference was a heavily politicized event. Keynote speaker Chris Baker opened the proceedings with a highly engaging presentation about political freedoms, mobility, and economic inequalities within Thailand. Mr Baker suggested that political freedoms in Thailand have regressed over the past decade with increases in media censorship and repression of academic discussions. These themes, of political freedoms and human rights in Thailand and other Southeast Asian countries, were further explored by many other presenters. Being an international relations and development conference, the majority of presentations focused on politics, economics, transnationalism, and Human Rights. In addition to these issues were discussions around community participation, cultural identities, mobility, minority rights, land tenure and food security. For his presentation on the conceptual origins of the Greater Mekong Subregion and the growth of Chinese regionalism in Northern Laos, CCR’s Kearrin Sims attempted to bring a socio-cultural analysis to the event. 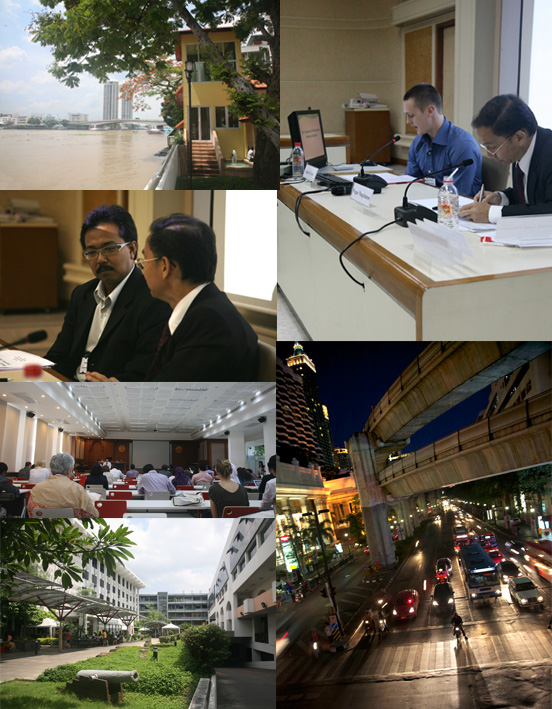 Titled ‘Expanding Regionalism in the Greater Mekong Subregion: Challenges and concerns for the Lao PDR’, Mr Sims' paper focused on Chinese regional influences in Laos’ northern provinces. Specifically, the paper discussed Chinese investments in Rubber, new Chinese built environments, and the expansion of Chinese influences on the Asian Development Bank funded regional ‘economic corridor’ of the North-South Economic Corridor. His presentation argued that the outcomes of regional integration are dependent on complex socio-cultural, political and economic relations. In contrast to discourses around regionalism that suggest increased economic integration will bring benefits to all within the GMS countries, the presentation argued that national, provincial and local socio-cultural power relations affect who benefits or is disadvantaged by regionalism, and highlighted the problematic disjuncture between development and poverty alleviation. On a wider theoretical level, the presentation also explored the conceptual origins of the GMS and suggested that the GMS is embedded within a market-oriented discourse that prioritizes the region’s economic integration over its social, cultural or environmental concerns. For Kearrin, the conference was an excellent opportunity to engage with new ideas, receive valuable feedback on his own research, and development new contacts prior to his fieldwork in Laos.

Kearrin Sims' paper ‘Expanding Regionalism in the Greater Mekong Subregion: Challenges and concerns for the Lao PDR’ can be accessed on request by contacting the author at lao.research@gmail.com.