These ten points are intended to bring together many individual points made by various participants, organised to promote and integrate thought and action. Each point begins with a proposition, which is expanded into a brief discussion, followed by ideas for and about museums and science centres as sites for action. The reflections draw on Symposium contributions from Fiona Cameron, Dawn Casey, Graham Durrant, Seb Chan, Elaine Heumann Gurian, myself, Frank Howarth, David Karoly, Lynda Kelly, Emlyn Koster, Declan Kuch, Wayne LaBar, Giles Lane, Tara Morelos, Brett Neilson, Saffron O’Neill, and Juan Salazar, with special thanks to Mike Hulme.

Below: Mike Hulme presents at the Symposium. 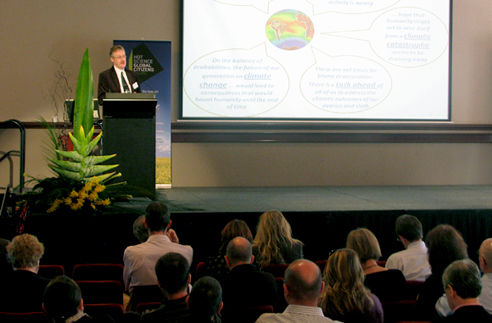 1. Climate change is too important to deny, too complex to reduce to a single analysis or problem.

Climate change is a vast, complex, heterogeneous set of phenomena. It presents challenges and invites solutions over many scales of time and space, from personal to global, from the Earth’s past to humanity’s future. It involves many components and aspects, impingeing on biological and social life, economics, politics, and culture, stretching all disciplines beyond current limits. Those who reject its scale and importance are living in denial, but advocates of a single analysis and solution also fail to recognise the scope of the challenge.

Museums should not aim at one definitive exhibition, to be repeated for the rest of the century. Different analyses of ‘Climate change’ may generate a continuous series of different exhibitions, creative responses to emerging senses of ‘Climate Change’ and what can be done.

2. The museum sector needs to draw on its heterogeneity to respond to the challenges of Climate Change.

All museums and science centres have their own histories, traditions, resources and connections, differences as well as links, which are part of what they bring to the task.

‘Classical’ forms co-exist with ‘new’ (‘second’/ ‘third generation’), added or grafted on to allow new complex strategies. Museums old(er) and new(er) can be ‘safe places for unsafe ideas’. Museums need to integrate old and new in strategies to excite, engage and inform citizens.

Climate change and responses to it are aspects of a linked phenomenon, yet local sites and personal spheres of action have their own features. Geological time is hard to see or represent as an experience. The future does not yet exist, and is even harder to represent or experience. To be moved to act on Climate Change, citizens and scientists alike must ‘see’ across all these scales, able to put past, present and future together, personal circumstances and neighbourhoods, the fate of their country and the planet. A strict definition of ‘climate’, contrasted with ‘weather’, is a problem in practice for many citizens, who feel they understand weather but not ‘climate’.

If visitors respond to ‘weather’ but not ‘climate’, then ‘weather’ in all its changes over many scales of time and space, including extreme events, can make climate change threats and responses more vivid and comprehensible. Museums operate in many different spaces, which can act in systematic ways on and in multi-scalar space.

Faced with the complex, dynamic challenges of climate change as interlocking environmental, social and political forces, institutions and agents of change need to be able to adapt rapidly across different scales, to identify new allies and resources to cope with new or old problems. Networks allow relations across the vast social and physical distances that need to be recognised and incorporated into cohesive responses.

Museums are already network organizations, but this capability will grow more diverse and extensive, able to include many who are currently excluded.

Conceptual walls and barriers as well as physical walls and barriers need to allow and negotiate flows and exchanges in dynamic systems. Solutions need to be provisional, right for problems as they present. Distinctions between inside and outside museums, visitors and other citizens, local and overseas, younger and older, more or less well-educated, from different cultures and backgrounds, need to be better recognised and managed.

Most boundaries that museums recognise will still exist in some form, but all can be negotiated to better serve the role of museums as agents of change. In order to respond like this, museums and the sector will need to rethink many assumptions and forms of organization.

The authority that science and museums once relied on can be counter-productive if the task is to empower new generations. It can alienate, rather than generate trust. New media alongside old can enrich the range of means of communication, but only if the form and intent of the communication is democratic and respectful. Dialogic models lead to mutual change over time. Trialogic models expand the awareness of social complexity at every level. Scientists can be consciously aware of and learn about museum perspectives and the needs of publics, and publics given insights into the distinct perspectives of science and museums.

Exhibitions can have a clear focus but not a single message. Planning, designing and changing exhibitions and displays should be informed by many voices organised as trialogues. Kinds of media, collections, written texts and electronic media should interact with each other. On-site, off-site and on-line sites should be in a trialogic relationship.

7. A dirty war has been declared, but it should be resisted not fought.

Vested interests with access to huge political, organisational and media resources have perverted the debate about climate change and the role of museums and science, on a scale that shocks scientists and museum staff who believe in the power of reason and respect for truth. Spokespeople are threatened, specious arguments are presented as truths, and lack of logic proclaimed as superior reason. Yet in spite of the temptation, adopting the same standards or ignoring ‘sceptics’ is counter-productive. It gives them a free hit.

Incorporating these voices in the space of museum is a risk that needs to be taken. Good scientists are the true sceptics. This complex point must be made, in publicity and exhibitions.

Art can be ten years ahead of the curve, engaging with new media as well as old. Its oblique communication gets highly complex messages across. Feelings, emotions and affects play a complex role in the dynamics of human action, in science and museums as in other spheres. They can be mobilized though art and other strategies to connect with imagination and creativity.

Museums need to offer less information, richer experiences. The emotions they aim at should have range and balance, including joy, wonder and delight, not just pressing the buttons of fear and guilt. The artists who produce such valuable experiences should be used more, and paid better. Arts organizations and museums can be partners in a climate change strategy.

Climate change is everybody’s business. Science and the museum sector need to address the exclusions that have been part of their history and identity, which still continue in spite of many efforts. This is a task for new media, including the social media, plus concerted efforts to go beyond the walls of museums. It requires a broader idea of citizenship, including marginalised citizens and indigenous people in Australia and elsewhere.

The current museum sector is better positioned to respond to this challenge than it has ever been, but there is still much to do.

10. Real change, deep and sustainable, is still the agenda.

Recognising the complexity and multi-scalar nature of Climate Change is not giving up on climate change action, but a way to build more effective responses, understood and endorsed by many more people and groups. Achieving real change needs real pressure, exerted on those with effective power. The status and authority of science and scientific institutions as of the museum sector have influence, but so far have not translated into policy action. Science is important, but not ‘scientism’ (exclusive reliance on the authority of science), nor ‘economism’ or ‘technologism’ (similar exclusive reliance on economic or technological fixes). The museum sector is not autonomous. It has to heed the views of funding bodies. Governments listen, but only to matters within a limited range. Big business exercises power through many means, including ownership and influence of media, lobbying and dirty tricks. Effective strategies may have to rely on ‘stealth advocacy’ to some extent, but safety and influence come from mobilizing networks and alliances across many groups, in a movement too broad, diverse and strong to be denied.

Sustained change requires museums and others to build coalitions and diversify forms of action, addressing and changing deep frames, shifting tectonic plates of public opinion rather than winning a particular debate or mounting one successful exhibition.