PhD Candidate Kearrin Sims makes an unexpected encounter with his research on Laos while in Tokyo City.

One of the most interesting (and exhausting) things about doing PhD research is that you start to see representations of your research interests everywhere you go. Recently I was in Tokyo city (en-route to Sweden to participate in the STINT research exchange program between ICS and Linkoping University), when I chanced upon a rather unexpected encounter with my research on Laos. Japan has long been Laos’ largest foreign aid donor and, upon landing in Tokyo’s Narita airport, I had not yet collected my luggage before I found myself considering the linkages between the two countries. Laos’ Wattay international airport in Vientiane is currently undergoing upgrades that are being funded by Japanese aid. The Urban Master Development Plan that sets out the guidelines for the transformation of Vientiane into a ‘modern’ Asian city has also been developed through Japanese financial and technical assistance. Finally, while ‘ultra-modern’ Japan has historically been the only country in the world to have a high-speed bullet train transportation system, even ‘Least Developed’ Laos now has plans to develop a high-speed rail project (albeit with the support of the Chinese rather than Japanese government). In short, Japan is certainly one of the key ‘players’ involved in opening Laos up to the interests, influences and investments of the wider Asian region.

Collecting my luggage and making my way out of the airport I took a train to Tokyo’s famous Shinjuku station in search of something to eat. Adding myself to the some two million people that pass through the station each day, I had not long exited the station's gates before I found myself confronted by a sudden downpour of rain. Dashing into the nearest sheltered area, I ended up in a Zara clothing store where I was shocked to find four pastel coloured t-shirts laid out to spell the word ‘Laos’. According to the company website, Zara is one of the world’s largest international fashion labels with more than 1200 stores worldwide. Known for producing new designs at a rate far quicker than many of their competitors, Zara’s Laos inspired t-shirts include phrases such as ‘Laos – simply beautiful’ and ‘Laos – the Original Asia’. Each t-shirt contains one large letter on the front (L, A, 0 or S), which is filled in with photographic representations of Laos that mostly include Mekong river scenery. 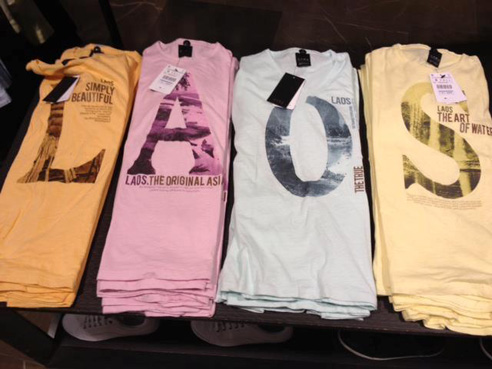 While I was surprised to see such an ‘unknown’ country as Laos represented on t-shirts that are designed by a Spanish fashion company I was much less surprised by their depictions of Laos. The ‘back in time’ or ‘original Asia’ imagery the t-shirts present is yet another example of the widely displayed representations of Laos as a peaceful, serene and globally-detached historical space; a land-locked Buddhist ‘Shangri-la’ that has not been contaminated by the destructive forces of modernisation or globalisation. Such depictions of Laos have been prevalent since the French colonial era and remain a mainstay of the way in which the country is promoted within the tourism industry. While it is true that Laos is a beautiful country, it is also a country that is undergoing rapid social, cultural and economic change. Alongside the tourism sector's representations of ancient Laos is a parallel discourse within the development sector that stresses the need to change the country’s ‘backward’ status; to open it up to the forces of globalisation so the country can become more ‘modern’ and thus, more developed.

Indeed it is likely that it is largely a result of these very forces of increased connectivity and growing transcultural recognition of Laos that has led Zara to feature Lao inspired designs on their t-shirts. Yet at the same time, the modernisation of Laos is also leading to changes within the country that may soon make the long-held representations of Laos depicted on these t-shirts a thing of the past. Beyond my own correlations between Laos and the rest of the Asian region, it is undeniable that the small land-locked country is gaining increasing recognition from those beyond its own immediate borders even, it seems, into the world of fashion.

As Laos continues to become more regionally connected, and as official development assistance within the country continues to be sidelined by ever-increasing levels of private investment from its regional neighbours (such as China, Korea, Vietnam and Thailand), the balance between the cultural preservation of ‘ancient Laos’ and the rapid modernisation of the country is quickly shifting towards a greater emphasis on the latter. In regards to the t-shirts I stumbled upon in Zara, a new megamall development project in the Vientiane (one of many new developments taking place in the capital) will bring many new global brands into Laos, reportedly including a Zara store. Perhaps if the t-shirts are reprinted in 2 or 3 years, Zara will be able to sell them directly to the Lao people themselves, although as time goes on I am not sure how accurate their current depictions of Laos will remain. Given the rapid pace of change currently taking place in Laos, I can’t help but wonder what these t-shirts would say if they were re-printed in 10-20 years time. Under Laos’ current development projections it seems, unfortunately, that future t-shirt designs of the country would be most likely to say something along the lines of ‘Laos, a transit highway for Chinese and Thai economic exchange’, or ‘Laos, a country of vast environmental degradation and ever-widening inequality’….

Post Script: Later, at another Zara store in Stockholm I went to check if the Laos t-shirt designs were also on display there and found them laid out spelling the word ‘AOLS’. It seems that Laos’ growing recognition within the Asian region is not yet being noticed within the Western world.