We are pleased to announce the publication of two new books based on findings from the Australian Cultural Fields: National and Transnational Dynamics research project: The Australian Art Field: Practices, Policies, Institutions and Fields, Capitals, Habitus: Australian Culture, Inequalities and Social Divisions.

These two volumes represent the culmination of the 5-year, ARC-funded research project into Australians' cultural tastes and practices, led by the Institute for Culture and Society's Professor Tony Bennett with a team of leading national and international researchers.

While Fields, Capitals, Habitus presents the findings of the project's detailed national survey of Australian cultural tastes and practices (including in-depth interviews with a number of survey respondents), The Australian Art Field focuses specifically on one of the areas of investigation: the art field.

Both books, published by Routledge, are now available for pre-order. They form part of a large collection of publications produced by the research team including books, chapters, special journal sections, and articles. 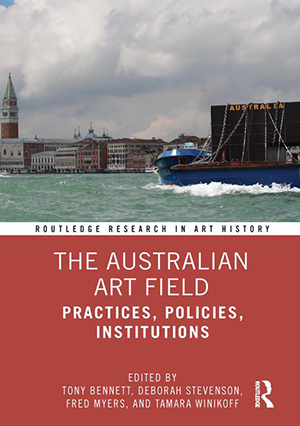 This book (opens in a new window)brings together leading scholars and practitioners to take stock of the frictions generated by a tumultuous time in the Australian art field and to probe what the crises might mean for the future of the arts in Australia.

Specific topics include national and international art markets; art practices in their broader social and political contexts; social relations and institutions and their role in contemporary Australian art; the policy regimes and funding programmes of Australian governments; and national and international art markets. In addition, the collection will pay detailed attention to the field of Indigenous art and the work of Indigenous artists. Particular attention is paid to the bearing of these questions on the position of Indigenous art in a settler-colonial state, multicultural art practices, and the relations between art, gender, sexualities and social class. Interviews with leading artists whose work engages with these questions adds to the uniqueness of this collection.

This book will be of interest to scholars in contemporary art, art history, cultural studies, and Indigenous peoples. 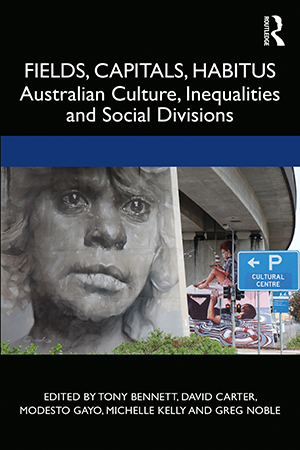 Fields, Capitals, Habitus (opens in a new window)provides an insightful analysis of the relations between culture and society in contemporary Australia. Presenting the findings of a detailed national survey of Australian cultural tastes and practices, it demonstrates the pivotal significance of the role culture plays at the intersections of a range of social divisions and inequalities: between classes, age cohorts, ethnicities, genders, city and country, and the relations between Indigenous and non-Indigenous Australians.

The book looks first at how social divisions inform the ways in which Australians from different social backgrounds and positions engage with the genres, institutions and particular works of culture and cultural figures across six cultural fields: the visual arts, literature, music, heritage, television and sport. It then examines how Australians’ cultural preferences across these fields interact within the Australian ‘space of lifestyles’. The close attention paid to class here includes an engagement with role of ‘middlebrow’ cultures in Australia and the role played by new forms of Indigenous cultural capital in the emergence of an Indigenous middle class.

The rich survey data is complemented throughout by in-depth qualitative data provided by interviews with survey participants. These are discussed more closely in the final part of the book which explores the gendered, political, personal and community associations of cultural tastes across Australia’s Anglo-Celtic, Italian, Lebanese, Chinese and Indian populations. The distinctive ethical issues associated with how Australians relate to Indigenous culture are also examined.

In the light it throws on the formations of cultural capital in a multicultural settler colonial society, Fields, Capitals, Habitus makes a landmark contribution to cultural capital research.

About the Research Project

Australian Cultural Fields examines the forces changing contemporary Australian culture. Focusing on art, literature, media, sport, music and heritage, it assesses the influence of transnationalism, digitalisation, migration and multiculturalism, and the distinctive presence of Indigenous culture, on the relations between culture, class, gender, ethnicity and nation.